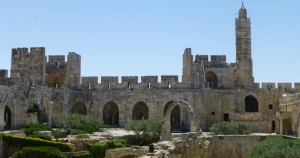 In anticipation of US President Donald Trump’s visit to Israel and Saudi Arabia, pressure is mounting on him to start a diplomatic process and leave the American Embassy in Tel Aviv. US Secretary of State Rex Tillerson on Sunday told NBC’s Meet the Press that the though US Embassy would move to Jerusalem, the president wanted to know how such a move would affect the peace process.

Rex Tillerson, at his confirmation hearing for US Secretary of State. – Photo: Wikipedia Commons

“The president I think rightly has taken a very deliberative approach in understanding the issue itself, listening to input from all interested parties in the region in understanding what such a move, in the context of a peace initiative, what impact would such a move have,” Tillerson said. “The president is being very careful to understand how such a decision would impact a peace process.”

So this could be a while. So if the peace process is active, he’ll hold off on moving the embassy.

“Well, I think it would be informed, again, by the parties that are involved in those talks, and most certainly from Israel’s view, on whether Israel views it as helpful to a peace initiative or perhaps a distraction,” the Secretary of State replied. “It think the president is being very measured as to how he goes about this, and appropriately so.”

Tillerson’s comments also drew reactions in the Israeli political system. The Prime Minister’s Office said that “Israel’s position has been expressed many times to the American administration and to the world … The transfer of the American embassy to Jerusalem not only will not harm the peace process, but will promote it by correcting a historic injustice and by smashing the Palestinian fantasy that Jerusalem is not the capital of Israel.”

Earlier, Education Minister and Bayit Yehudi Leader Naftali Bennett called on Netanyahu to “make it clear that we expect the US administration to transfer the embassy to Jerusalem and recognize the united Jerusalem under Israeli sovereignty.” Bennett added that “the transfer of the US embassy to the Israeli capital strengthens Israel,” adding that “any agreement based on the division of Jerusalem is destined to fail.

“Just as the embassies of the countries of the world are in the capital of the United States, Washington, they should be in Jerusalem, our eternal capital for 3,000 years,” concluded Bennett.

The Likud responded to his remarks by saying, “We congratulate Bennett on his memorizing the press releases issued by Israeli Prime Minister Benjamin Netanyahu and quoting them as if they were his own demands, as he has done on many issues. This is consistent with Netanyahu’s demand for the transfer of the American Embassy to Jerusalem.”

PA does not believe the embassy will be moved

In a joint press conference with Egyptian Foreign Minister Sameh Shukri and PLO Executive Committee Chairman Saeb Erekat, Jordanian Foreign Minister Ayman Safadi said that east Jerusalem should be the capital of Palestine, while West Jerusalem is the capital of Israel. Safadi said that the issue of Jerusalem should be treated with caution. “Everyone is convinced that the president of the United States wants to act effectively for peace. The three of us felt a genuine commitment by Trump to resolve the conflict. ”

The three stressed that the two-state solution, comprised of an independent Palestinian state within the 1967 borders and with Jerusalem as its capital, as the only way to achieve lasting peace. They made it clear that they would cooperate with the US administration to take the necessary steps to move toward peace. They also said that the Israeli-Palestinian conflict is the source of tension in the region and that achieving a two-state solution is the condition for achieving regional peace and stability.

The Palestinian leadership in Ramallah believes that the American embassy will remain in Tel Aviv. Until three months ago, such a move by President Trump would have caused a great deal of concern in Ramallah, but a senior Palestinian official involved in the discussions told Ynet that the issue of transferring the embassy was not on the agenda.

The source hinted that the Palestinians received a positive signal regarding their demands from the Trump administration, in addition to the arrival of CIA Director Mike Pompeo in a secret visit to Jerusalem and Ramallah about three months ago, during which Pompae met with Palestinian President Mahmoud Abbas Mazen.

Another source outside the Palestinian Authority told Ynet that Ramallah had already sent messages to the various interested parties in the area two months ago. The very positive meeting between Abbas and Trump at the White House encouraged the Palestinians to believe that the embassy will remain for the time being in Tel Aviv.