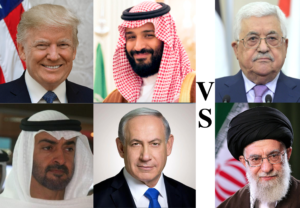 The review by by Adam Entous examines the White House’s up to date strategy concerning Israel, the Palestinians, and the Gulf states. The article cites selected quotes from official talks held between the US administration and the government in Jerusalem, and between Prime Minister Benjamin Netanyahu and President Donald Trump.

Overt and covert complex relationship are also detailed between Israel and the United Arab Emirates (UAE) and its leader Mohammed bin Zayed since the Oslo Accord to the present day.

Israel and the UAE have forged unofficial and economic ties over the years but they have not evolved into a full and open diplomatic relationship. However, Iran—considered as Israel and UAE’s mutual enemy—has fomented the merging of the countries to form a united front against it.

Saudi Arabia—that previously distanced itself from Israel—joined the front against Iran and now its Crown Prince Mohammad Bin Salman who also serves as the deputy prime minister is cooperating with Israel behind the scenes against Iran’s Ayatollahs regime.

Despite the fact that President Trump had showed little interest in the Middle East, he was perceived as a savior by Netanyahu, bin Zayed and Bin Salman after pulling out of the Iran nuclear deal, signed by his predecessor Barack Obama.

As far as Trump was concerned, “all of this was an annoyance,” he went on.

Nevertheless, the Iranian threat lurking on the one hand and the Middle East leaders knocking on the White House’s doors on the other, compelled Trump to establish its Middle East policy.

According to the article, Netanyahu had invested significant effort to tighten his relationship with Trump prior to his inauguration as president. The Israeli prime minister had taken the bold step of quietly dispatching Yossi Cohen, the head of Mossad, Israel’s foreign-intelligence agency, to Washington.

Cohen briefed then candidate for National Security advisor Michael Flynn on the Iranian threat in an attempt to ensure that the two governments would be closely aligned in their approach—while Obama still served as president.

Adam Entous, the article’s author, says that “Intelligence veterans said that Cohen’s visit was a breach of protocol” and stressed that the visit was meant to further tighten US-Israel ties which were damaged amid the grave rift between Obama and Netanyahu.

Trump, did in fact put Jared Kushner in charge of Middle East policy. The choice for Ambassador to Israel was David Friedman, a bankruptcy lawyer from Long Island who held right-wing views on the Middle East and contributed money in support of the same West Bank settlement as the Kushners did. The chief envoy to the region would be Jason Greenblatt, a graduate of Yeshiva University and an attorney who worked for the Trump Organization.

Netanyahu could be confident that Trump would look out for his interests and share his opposition to Obama’s policies in the region, according to Entous.

Gulf state: Iran has to be dealt with first

Entous’ review argues that Israel and the UAE’s joint concerns about Iran obtaining nuclear weapon triggered the renewal of a relationship between the two countries, without the knowledge of the US.

“US intelligence agencies learned of phone calls between senior UAE and Israeli officials, including calls between a senior Emirati leader and Netanyahu. Then US intelligence agencies picked up on a secret meeting between senior UAE and Israeli leaders in Cyprus. US officials suspect that Netanyahu attended the meeting, which centered on countering Obama’s Iran deal,” according to the report.

Israeli PM Netanyahu had something to offer Saudi Arabia’s Prince Mohammed ben Salman, whereas Palestinian autocrat Abbas is only a burden. – Photos: Wikimedia

Bin Zayed and Bin Salman coordinated their stances and forged an alternative plan regarding the Palestinians.

Bin Salman agreed to postpone the resolution of the Palestinian problem to which his father King Abdullah—who promoted the Arab Peace Initiative—was committed.

“While Bin Zayed and Bin Salman made it clear to Trump’s advisers that Iran was their most urgent priority, they said that progress toward ending the Palestinian conflict was mandatory for them to have a more open relationship with Israel,” the article charges.

“By May, 2017, when Trump met with Arab leaders in Riyadh, Kushner and Bin Salman had agreed on the outlines of what they called a Middle East strategic alliance. Israel would, for now, remain a ‘silent partner.’

“The US committed to taking a harder line on Iran. And the Gulf Arabs promised to help get the Palestinians to go along with the new program.”

The secret allies also aligned when it came to Russia that tightened its grip on the Middle East as Iran and Syria’s ally.

“In recent years, the Emiratis and the Saudis sought to pull Russia’s President, Vladimir Putin, out of Iran’s orbit by investing billions of dollars in the Russian economy,” the article explains.

“An even more critical reason for Netanyahu to curry Putin’s favor was to ensure that the Israeli military could fly in Syrian airspace, which was partly controlled by Russia, to carry out operations without ending up in a conflict with Moscow,” it continued.

Netanyahu, it claims, understood that Putin could be the key to getting Iran to eventually withdraw its forces from Syria, an objective shared by Trump and his team.

Entous writes in his article that “Trump initially tried to ease tensions with Putin, but those efforts only fuelled questions about his motivations, given Russia’s meddling on his behalf during the 2016 campaign. US lawmakers and European allies gradually prevailed on Trump to take a harder line.”

Putin’s advisor and Trump’s advisor had been in contact, and their communications later became a focus of the investigation undertaken by Robert Mueller, the special counsel, into Russian meddling in the 2016 election.

Meanwhile the secret cooperation between the UAE, Saudi Arabia and Israel had tightened, and according to a former US official “one would-be contractor who is close to the Emiratis, the Saudis, and the Israelis presented a plan to use cyber weapons planted inside Iran’s critical infrastructure.”

Despite that, the official meeting with Bin Zayed and Bin Salman was never on the agenda, and Netanyahu understandingly accepted that.

“The Gulf leaders represented Israel’s best hope in generations for securing acceptance in the region. The last thing the prime minister wanted was for a mere photo op to spark a popular revolt against,” writes the New Yorker.

When Mahmoud Abbas was still optimistic

This newly formed strategic partnership in the region, amid the Iranian threat, left the Palestinians in the dark. The New Yorker reports that the White House’s approach towards them was akin to that of Wall Street.

“Like in life—Oh, I wish I bought Google twenty years ago. Now I can’t. I have to pay this amount of money. It’s not that I’m being punished. I just missed the opportunity,” the official from the Trump administration is quoted as saying.

This metaphor is also being repeated by Ambassador David Friedman, and according to them the plan that is being offered to the Palestinians is a “bankruptcy-type deal”. Interestingly, Friedman, as a former bankruptcy lawyer, used to “structure bankruptcy deals” for his clients, one of which was Donald Trump.

Saeb Erekat, a senior PLO official who was in charge of the negotiations also reported a similar approach from the Trump Administration, which manifested itself during his conflict with Jared Kushner, when the latter announced that he opposes the possibility of direct peace talks between Israel and the Palestinians.

“If I don’t take thirty cents on the dollar now, I’ll get fifteen cents next year,” Erekat described the manner in which he was treated by the Trump’s team.

The New Yorker article describes the first conversation between Mahmoud Abbas and Donald Trump after the elections. Two months have passed between the inauguration of the president and the initial contact with the Palestinian leader. The interaction between them was short, sharp and disconnected from reality.

“We’re talking about a historic peace deal,” Trump said at the beginning of the conversation on March 10, 2017. When Abbas said “We believe that through negotiations we can achieve peace with the Israelis,” and underlined his willingness to talk with Netanyahu in order to jumpstart the negotiations, Trump replied “Oh, that’s very good.”

Entous emphasizes that at this point the conversation took an unexpected turn when Trump asked Abbas whether he thinks Netanyahu wants a peace deal, to which dumbfounded Abbas replied “He is the prime minister of Israel. We don’t have any other option.”

Trump then stated that in light of him becoming president, there is a real opportunity for peace. Trump vowed, as a neutral party, to “give it my one-hundred-per-cent efforts,” adding “it’s going to happen.” For his aprt, Abbas replied: “We count on you, Mr. President, we believe you can do it.”

Almost one year has passed since that call and Trump and Abbas no longer talk. Their latest conversation took place moments before the US Embassy move to Jerusalem from Tel Aviv was announced.

Trump apparently promised Abbas “the best possible deal” if the latter was to stay committed and repeated multiple times that Palestinians would get a “better” deal than what was promised to them by the previous US administration, according to the the New Yorker.

After 15 minutes of talking, Trump stopped in order to hear Abbas’ response but by that time the call had already disconnected, unclear at which point exactly, and the call hasn’t been renewed ever since.

Although the new Middle East, as Trump and his team envision it, tends to favor Israel and the Gulf States, Entous describes several scenarios which are a lot less pleasant for Israel, at least according to the experiences of Israeli Ambassador to the US Ron Dermer.

Senior White House officials opposed what they described as Dermer’s subversive tactics. “This is our fu**ing house,” exclaimned one official. The general feeling in the White House apparently is along the lines of “there is a lot of good will, but don’t take advantage of us.”

At a certain point Kushner even went as far as cursing Dermer in his West Wing office in front of White House personel, saying he wasn’t going to service him only because he was Jewish. “You’re not going to tell us how to run these things. Don’t try to push us around. Don’t try to jam us.”

In response to the alleged incident, Dermer replied, “I have a very good relationship with Jared, but we don’t always agree on everything.”