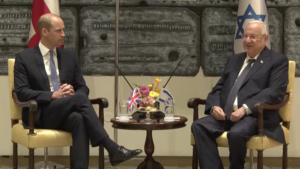 The Duke of Cambridge arrived in Israel for the first-ever official visit by a member of the British royal family on Monday evening, touching down in Ben Gurion Airport where he was greeted by Tourism Minister Yariv Levin and Likud MK Amir Ohana.His visit to Yad Vashem began at 10:15am, where he met with Holocaust survivors and, donning a Kippah, laid a memorial wreath honoring the Jews murdered in the Nazi Final Solution.

The Duke met two survivors who escaped Nazi Germany for the safety of Britain. The memorial has recognized Prince William’s great-grandmother, Princess Alice, as part of the Righteous Among the Nations for her role in rescuing Jews during the Holocaust.

He voiced his horror at the sight of shoes left behind by Jews killed in a Nazi extermination camp.

“Terrifying. (I’m) trying to comprehend the scale,” he said, viewing the display.

Yad Vashem said Princess Alice “hid the three members of the Cohen family – Rachel, Tilda and Michelle – in her palace in Athens during the Nazi occupation of Greece.”

It said: “Princess Alice personally saw to it that the members of the persecuted Jewish family had everything they needed, and even visited them in their hiding place, spending many hours in their company.”

Thanks to her, the Cohen family survived and today lives in France, it said.

The princess died in 1969 and in 1988 her remains were brought to Jerusalem.

In a private 1994 visit to Yad Vashem, Prince Philip, the Duke of Edinburgh, planted a tree there in his mother’s honor.

Prince William was escorted during his tour of the museum by British Chief Rabbi Ephraim Mirvis and guided through the museum by Yad Vashem Chairman Avner Shalev.

Shortly after, the prince met with Prime Minister Benjamin Netanyahu and his wife, Sara. No public statements were made. Later on, he will meet President Reuven Rivlin.

And now from the inside. Prince William meets with Netanyahu and his wife, Sara. Photo by Marc Israel Sellem @israelphoto pic.twitter.com/vGUCsYYozA

On Tuesday afternoon Prince William will travel to Jaffa “where he will meet with young people involved in the work of two organisations focused on co-existence between the young people of different religious and ethnic communities—the Equaliser and the Peres Centre for Peace,” an official statement says.

He will arrive at a soccer event hosted by the two charities and will spend time with children and teenagers involved in several of their projects, including one focused on empowering young women.

His next stop will be a visit to central Tel Aviv together with Mayor Ron Huldai. He will also attend a reception at the British Embassy in Ramat Gan together with 350 guests. The event will be broadcast live on the BBC.

On Wednesday, William will visit the Beit Ha’ir Museum and meet with representatives of leading Israeli start-up companies and watch a presentation on Israeli innovation. He will also meet with young activists, both Jewish and Arab, who are involved with youth, education and social programs. He is also expected to attend a cultural event, which has yet to be announced, in the city as well and not leave before paying the beach a visit.

Welcome to Israel HRH Prince William, it is an honor and a pleasure to have you here. 🇬🇧🇮🇱 pic.twitter.com/V7sqQ1NR4P

Reuters and Associated Press contributed to this report.