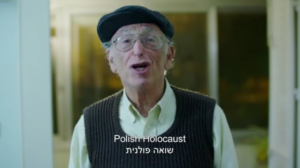 The video provocatively used the term “Polish Holocaust,” which is historically inaccurate, to protest a controversial new Polish law criminalizing the suggestion that Poland was complicit with Nazi Germany’s crimes, especially the Holocaust.

The foundation also launched a campaign calling for the United States to sever its ties with Poland, despite it being an ally in the North Atlantic Treaty Organization, where the U.S. has recently deployed troops. By Wednesday night, over 600,000 had signed an online petition organized by the foundation.

As part of the campaign, a video was released Wednesday in response to the Polish law. The law has angered Israel, which sees it as an attempt to whitewash the actions of Poles who killed Jews during World War II.

On the other hand, the provocative use of the term “Polish Holocaust” in the video was deemed grossly offensive by many in Poland. Many of Nazi Germany’s death camps, like Auschwitz, were located in German-occupied Poland. Poles had no role in operating them but accounted for the largest number of victims, after Jews.

Jonathan Ornstein, director of the Jewish Community Center in Krakow, said that he explained to foundation president Jay Ruderman how troubling the video was and was assured that the video would be removed. It was pulled from YouTube later in the day.

“The term ‘Polish Holocaust’ is not accepted by any reasonable person whether Jewish, Polish, Israeli or German,” Ornstein said. “Emotions are running high and harmful, inaccurate comments from various sides have been published, but this is indefensible.”

The Ruderman Family Foundation released a statement saying that “after a hugely successful campaign that went viral internationally and among American Jews and Israelis who have signed the petition – the Foundation was contacted by the Polish Jewish community and because of their concerns for their safety, we decided to halt the campaign.”

Michal Dworczyk, an aide to Polish Prime Minister Mateusz Morawiecki, described the video as an affront to the thousands of Poles who risked their lives during the war to help Jews.

Polish state television’s news channel TVP Info reported it as the top story on its website, calling the video “shocking.”

Witold Jurasz, a journalist with the private Polsat broadcaster, called the video “offensive and scandalous,” and said it “spits in the face of every Pole” – even those who, like him, oppose Poland’s Holocaust law.

Polish media criticized the campaign, along with many enraged responses. One critic even remarked, “Polish Holocaust? This is as if the USA attacked Pearl Harbor.”

The video also evoked responses from Polish anti-Semites, with one comment reading: “I love the Germans and hate the Jews.”

Tens of thousands of reactions to the campaign appeared on social media, including blatant anti-Semitism. Many responses were posted on the official petition site, such as: “The Jews don’t have a monopoly on the Holocaust;” “stop lying, there were no Polish death camps;” and “in the name of 36 million Poles, the Polish Holocaust didn’t happen.”

The Polish Embassy in the U.S. released a statement blasting the campaign and video.

“We are shocked that the Ruderman Family Foundation has published a reprehensible video blaming Poland for the Holocaust,” it said. “We condemn this historically inaccurate production and treat it as a malicious attempt to heighten emotions during a sensitive time.

“The Embassy of the Republic of Poland appeals to those who value U.S.-Poland-Israeli ties to speak out against this campaign of falsehood.

“Our Embassy has been engaged in constructive discussions with our partners regarding Poland’s anti-defamation legislation, and these talks will continue in the spirit of good cooperation. The Ruderman Family Foundation’s disinformation campaign should not be allowed to derail this important dialogue.”

Poland’s Holocaust law, which takes effect on Feb. 28, has already triggered rising anti-Semitism in Poland. In reaction to criticism from Holocaust historians and others, the government said it will be reviewed by Poland’s constitutional court.

Polish Deputy Foreign Minister Bartosz Cichocki said Tuesday that no criminal charges would be brought under the law until the court reviews it.

From Israel and Stuff: