Purim’s carnival atmosphere spread out across the country on Sunday, with revelers of all types and ages soaking up the holiday cheer, many bedecked in bright, loud and extravagant costumes. 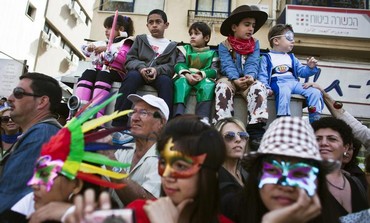 As in every year, traditional ‘Adloyada’ Purim parades were held the length and breadth of Israel in cities and towns throughout the country, wending their way through town centers and major urban thoroughfares.

Holon’s Ad’deloyada, one of the most renowned, included more than 4,500 participants making merry, including dancers, artists, musicians and other performers from around the country who all marched through the streets of the city.

The parade this year included a toy train containing 20,000 flowers and a gigantic baroque music box, ten meters by five meters, from which burst out dancers and musicians to further enliven the celebrations.

The settlement of Kiryat Araba also held its ‘Adloyada’ on Friday, in which over a thousand people young and old streamed through the town’s streets, while other large parades took place on Sunday in Givatayim, Kfar Sava, among others.

And the latest Internet meme, the Harlem Shake, was credibly replicated in Tel Aviv on Saturday, with thousands of people taking part in a mass Harlem Shake dance in the city.

The Women of the Wall were scheduled to hold a megila reading for women down at the Western Wall on Monday morning on Shushan Purim, the date on which Purim is celebrated in Jerusalem, which falls the day after holiday is marked everywhere else. The organization said it was expecting as many as 200 participants to attend its service.

In one Purim development, the grand rabbi of the Karlin-Stolin hassidic dynasty Rabbi Baruch Shochat reportedly required anyone with a smartphone to hand it over if they wished to receive the shot of brandy shot which the hassidic leader traditionally distributes on Purim at his court in Givat Ze’ev.

Smartphones are widely disapproved of in the haredi world because of the unfiltered access they provide to content to the internet. According to the haredi news website B’hadrei Haredim, Shochat has until now refrained from banning the devices but was not ready to tolerate them among his hassidim over the Purim festivities.