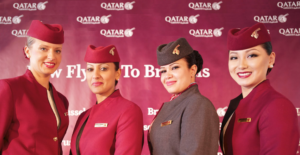 Although Israel isn’t on Qatar Airways maps, its CEO said that “healthcare professionals from every country in the world will be eligible for tickets…including our neighboring countries, including the State of Israel.”

Israeli medical professionals can get some of the 100,000 free flight tickets distributed by Qatar Airways, the airline’s CEO Mr. Akbar Al Baker said on Monday night.

Al Baker said that “every single country in the world, including our neighboring countries, including the State of Israel, will be allocated numbers of tickets, depending on population and the size of the country… proportionately to the 100,000 tickets we are offering.”

The Qatar Airways CEO made the comment in an interview with CNN about the giveaway, which the airline set up as a way to thank front-line healthcare workers, after journalist Richard Quest asked Al Baker about the eligibility of medical staff from countries to which Qatar is hostile, like Saudi Arabia, the United Arab Emirates and Israel.

“There is no difference, no barrier in medical fields,” Al Baker added. “There are no boundaries.”

Although Israel does not appear on Qatar Airways maps, a press release from the airline says that “healthcare professionals from every country in the world will be eligible for tickets.”

The announcement from Qatar comes on the heels of three other Gulf States seeking medical partnerships with Israel.

Bahrain and another Gulf state reached out to Sheba Medical Center at Tel Hashomer, expressing interest in the hospital’s response to the pandemic, and the United Arab Emirates ambassador to the United Nations said publicly that her government would be willing to work with Israel on a vaccine.

“I have heard leaders in the Gulf say over and over, ‘with our resources and wealth and Israeli innovation, we can create a vaccine and a cure,'” said Rabbi Marc Schneier of the Hamptons in New York, who has extensive ties in the Persian Gulf as president of the interfaith dialogue organization Foundation for Ethnic Understanding. “They have seen this pandemic as an opportunity for cooperation between themselves and Israel.”

Qatar Airways began distributing tickets on Tuesday and will continue through May 18. Healthcare professionals interested in the free tickets can submit a form and receive a promotion code, which they can use in an order to waive the cost of up to two coach tickets, for themselves and a companion. Each country will be allocated a number of tickets proportionate to its population size on each day of the giveaway week.

Al Baker said: “We at Qatar Airways are incredibly grateful for the commitment and hard work of healthcare professionals around the world who looked after people in these times of uncertainty. Their heroic display of kindness, dedication, and professionalism has saved hundreds of thousands of lives around the world.”