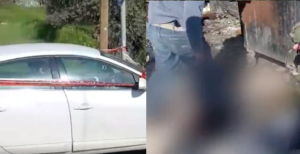 Knife wielding Palestinian terrorist suddenly opens passenger side door in attempt to stab schoolgirl, then shot dead by her armed father who was driving her to school.

A terrorist was shot and killed in Samaria Wednesday morning, during an attempted stabbing attack near the Hawara checkpoint south of Shechem (Nablus), an IDF spokesperson said.

The incident occurred at approximately 8:30 a.m. Wednesday, when a Palestinian Arab terrorist carrying a knife opened the door of a private Israeli vehicle as it passed near the Arab town of Hawara on Route 60.

The terrorist attempted to stab an Israeli civilian sitting in the front passenger seat of the car, but was shot and neutralized by the driver of the car, a resident of the Israeli town of Elon Moreh, near Shechem.

Witnesses say the Israeli targeted by the terrorist was a female ulpana [religious girls’ high school] pupil being driven to school by her father.

The terrorist was shot and seriously wounded. Emergency response teams treated the terrorist on the scene and evacuated him to a hospital for further treatment. The assailant was declared dead shortly after his arrival at the hospital.

No injuries were reported among Israeli civilians or security personnel.

The driver, who has been identified as Yehoshua Sherman, is a member of the Elon Moreh rapid response team, TPS reported, and works as an activist on behalf of the Union of Right-Wing Parties (URP) Knesset list.

“I was on my way to work at the party office and was driving from Elon Moreh towards Tapuah,” Sherman told TPS. “At Beytot Junction, a terrorist carrying a knife jumped on my car, and tried to open one of the doors. I got out, and while the terrorist was trying to go around the car to approach me, I shot and neutralized him, with the help of a Yitzhar resident who had been driving his truck behind me.”

“This is how we need to act – with fearless determination against our enemies. This incident illustrates the importance of finished the construction of the [alternate road] going around Hawara, which was agreed to by the Prime Minister. There is no reason why Israeli residents need to go through a hostile Arab population every morning and risk their lives and their children’s lives, especially now that the decision to build it has already been made. We need to accelerate the building of the alternate road immediately.”

The stabbing attempt occurred near the Arab town of Hawara, which sits on Route 60, the primary north-south road in Judea and Samaria. For years, residents of the Israeli Gav Hahar (Nablus district) towns in Samaria have complained of regular stone-throwing and even firebomb attacks on Route 60 in Hawara.

In 2017, a mob of Hawara residents blocked the road, trapping an Israeli motorist inside the village. A lynch mob attacked the car, attempting to force out the driver, who opened fire, killing one terrorist and wounding a second.