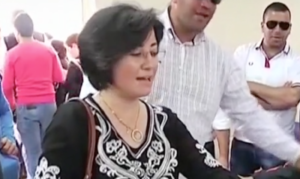 “We must admit that Israel is becoming a fascist – began to have fascist laws. And a lot of critical Israelis describe Israel as, and compare Israel – and what I say here, and you record it, we say in Israel, we say it inside the Knesset – it is suitable to compare, logical to compare Israel, and this is a public opinion, with Germany in the 30s,” Zoabi said.

Audience members shouted “rubbish, rubbish,” “shame on you” and “you support Hamas” at the Israeli lawmaker, sparking a brawl between the attendees.

The meeting was held at a Unite (the union) building in Birmingham. It was organized by West Midlands Palestinian Solidarity Campaign.

Zoabi’s speech was particularly inflammatory, as she called for an end to Israel defining itself as a Jewish state.

“It’s the laws of the game that we must change,” Zoabi said. “And the name of these laws of the game – Jewish state. Not occupation. Not just occupation. Because – did you ask yourself what is the meaning of ‘Jewish state’? Anyone ask, why Israel needs to define itself as a Jewish state? To secure itself? This is not the way a state secures itself. And killing the Palestinian, I think it is the way to put yourself into danger.”

Zoabi spoke about the humanitarian crisis in the Gaza Strip, explaining that the situation in the coastal enclave has become unbearable.

“And to put a siege around two million people, and to pollute 95 percent of the water of Gaza is not the way you secure yourself. It is the way you oppress others. Ninety five percent, and the UN report describes Gaza as unsuitable for human living! And no one makes an issue from it,” Zoabi said

One audience member accused Zoabi of incitement and called her speech unlawful.

“These are lies and incitement to hatred,” one audience member said. “I am a British citizen and you are breaking the laws of Britain by inciting hatred!”

The firebrand Arab-Israeli MK has stirred up controversy in the past. In 2016, she declined an invitation to attend a ceremony marking Holocaust Memorial Day and has publicly accused Israel of ethnic cleansing.