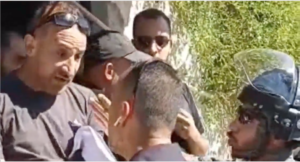 On Wednesday, Israeli police removed members of the Siyam family, and activists supporting the family, from a building they had illegally taken control of in the Silwan neighborhood of Jerusalem.

Officers removed the squatters, their furniture, appliances, and other property before transferring the building over to the Elad organization, which purchased the property years ago. At least one of the squatters was arrested for resisting the eviction, the Palestinian Authority’s WAFA media outlet reported.

The property, located in the Silwan (Shiloah) neighborhood of the capital, was purchased from the State decades ago by the Elad organization – an NGO dedicated to reclaiming Jewish property in eastern Jerusalem.

While Elad was the legal owner of the property, the eviction of the Arab squatters took 25 years of legal battles.

In addition, the court ordered that 38,000 shekels ($10,600) raised on behalf of the Siyam family for their legal efforts be transferred to Elad, to cover years of back rent owed to the organization for the time the squatters occupied the building.

Today a predominantly Arab neighborhood, Silwan was home to a large Jewish community in the 19th and early 20 century. Most of the Jewish population was forced out, however, in the late 1930s by the Arab Revolt, with the remaining community barred from the area after Jordan occupied eastern Jerusalem in 1948 and seized Jewish-owned property.

Since the 1980s, a number of Jewish organizations have actively worked to restore the Jewish presence in Silwan and other areas of eastern Jerusalem seized by Jordan in 1948.

For those who are unaware of Jerusalem’s ‘modern’ history, the entire Jewish population was evicted from Jerusalem by the Jordanian army in 1948.

John Phillips, a Life Magazine photographer was present to photo-document the horrific event.

This Evacuation of Jews from Jerusalem in 1948 was the beginning of the Ethnic Cleansing perpetrated by the Arabs, leaving Jerusalem ‘Judenfrei‘ for the first time in 2 millennia.

Life Magazine pics of Arab army removing Jews from Jerusalem 1948 *licensed for personal, non-commercial use allowed since This educational website operates without financial incentives. Furthermore, there are no commercial advertisements for profit, nor does IsraelandStuff.com accept donations.

This Evacuation of Jews from Old city of Jerusalem 1948 was the beginning of the Ethnic Cleansing perpetrated by the Arabs, leaving Jerusalem ‘Judenfrei’ for the first time in 2 millennia.

Elderly Jewish man sitting in street after surrender of Jerusalem, Israel. June 1948. – Photo: John Phillips
In only hours, Jerusalem will become Judenfrei (“free of Jews”) for the first time in 2 millennia. This act of Arab apartheid will end by Israel’s reclamation in June 1967, 19 years later.

Jewish girl, Rachel Levy, 7, fleeing from street with burning buildings, as the Arabs sack Jerusalem after its surrender. May 28, 1948. John Phillips

Looting in burning Jerusalem, after the expulsion of its Jewish population. John Phillips. June 1948

The Jewish Quarter of Jerusalem after the Jews were exiled by the Jordanians.  June, 1948
The Quarter was taken over by Arabs and kept Judenfrei (“free of Jews”) until the IDF recaptured the city 19 years later, in June 1967. Unfortunately, squatters still remain the majority inhabitants in old Jewish homes.

Jewish soldiers lying injured in hospital after surrender of Israel’s Eternal Capital, Jerusalem.
The following day, all captured land was made Judenfrei (without Jews) by the invading Jordanian Army.
June 1948. Photo: John Phillips

Jewish prisoner being escorted out of Jerusalem by Arab soldiers
Now for the truth:
Behold, This is the ethnic cleansing of Jews from the Old City of Jerusalem by the Jordanian Muslim occupiers. June 1948

Dr. Moussa Husseini (4R), and a leader of Haganah forces, walking with Arab soldiers after signing the surrender of Jerusalem 1948

Elderly Jews going to Zion’s Gate in the evacuation of the Jewish quarter of Jerusalem. June 1948. John Phillips

Arab looters after evacuation of Jewish quarters in Jerusalem 1948
For the first time in centuries, Jerusalem (the Old City) is once again Judenfrei (“free of Jews”) after the Jordanian Army massacred or exiled all the Jews.

…and THAT is how East Jerusalem became Arab!
Where’s the Justice?!!