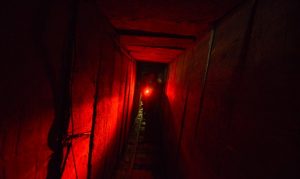 Hamas has been busily reconstructing its terror tunnel network breaching into Israeli territory and which was targeted by Israel during the 2014 counterterror operation.

During that time, there have been several incidents in which tunnels collapsed and terrorists were killed. One such incident occurred in October, when a member of the Izz al-Din al-Qassam Brigades, Hamas’s armed terror wing, was killed after an underground tunnel collapsed on him.

Last month, two Hamas terrorists were killed when a terror tunnel collapsed in the Shuja’iyya neighborhood of Gaza.

A senior Israeli security official recently indicated that Hamas continues to dig 10 kilometers in tunnels leading into Israel per month.