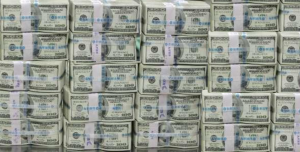 The Palestinian Authority issued payments to terrorists and their families totaling more than $1 billion over a four year period, according to a recent study by the Jerusalem Center for Public Affairs. The sum accounts for seven percent of the PA’s budget and is equivalent to 20 percent of the foreign aid the PA receives annually.

The payments are written into PA law, which declares that the prisoners — who are often convicted of security offenses — are “a fighting sector and an integral part of the weave of Arab Palestinian society,” and guarantees “the financial rights of the prisoner and his family.” Prisoners consequently receive a significant payment while incarcerated, as well as jobs or salaries upon their release. The time they served behind bars also counts toward their seniority in PA institutions.

A prisoner who completed a five-year sentence or longer is entitled to a civil service job in the PA. As longer sentences result in greater authority and better pay, it means that Palestinians incarcerated for more serious crimes, including terror, are rewarded more generously.

The PA’s budgets for 2013 to 2016 each allocated over $270 million in payments for terrorists and their families, according to the research presented in the paper.

In order to escape growing criticism of the practice, the PA ended direct payments to terrorists and their families in 2010 and instead began sending the funds to the PLO, which distributes the funds to their intended recipients.

Despite Shaath’s dismissal, Trump reiterated his disapproval of the practice during his joint appearance with Abbas in Bethlehem on Tuesday. “Peace can never take root in an environment where violence is tolerated, funded and even rewarded,” he said.

The Wall Street Journal‘s editorial board argued in November of last year that payments to Palestinian terrorists “are an official incentive program for murder that in any other context would be recognized as state sponsorship of terror.”

Eli Lake wrote in Bloomberg View in July, 2016 that offering salaries to Palestinians who kill Israelis “encourages” terror attacks “as a legitimate act of resistance.”

The subject of payments to terrorists came to the fore in Britain in March 2016 after The Mail on Sunday published an exposé showing that the PA paid generous salaries to a number of convicted Palestinian terrorists. That report, as well as another released by Israel Radio, was based on research done by Palestinian Media Watch, a nonprofit that has documented how the PA incentivizes terror since 2011.

A 2014 report in The Telegraph showed that the PA used over $90 million in British foreign aid to pay convicted terrorists in 2013. This equaled around 16 percent of all foreign aid payments to the PA.

This is basically what the Palestinian Authority advocate:

This (literally) would not be possible without the generous financial aid provided to the Palestinians from the UK, EU & US…. the financiers of murder, mayhem and suffering.