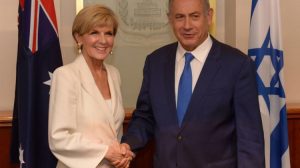 PM Malcolm Turnbull’s affirmation of Australia’s committed to the 2-state solution policy to the Israel-Palestinian conflict contradicted those made by Foreign Minister Julie Bishop, who stated that if both sides agree upon a 1-state solution, Australia would recognize it.

Australian Foreign Minister Julie Bishop said Thursday that she would support a one-state solution if it were agreed upon by both the Israelis and the Palestinians, Sky News reported.

The comment comes ahead of Prime Minster Netanyahu’s visit to Australia, slated for Monday, making it the first time an Israeli prime minister has ever travelled to the country in an official capacity.

Australian Prime Minister Malcom Turnbull said in an interview Thursday that Australia’s position on the matter has not changed and that his administration continues to support a two-state solution agreed upon by both sides of the conflict.

His comments, however, contradicted those made by Foreign Minister Julie Bishop who stated that if both sides can agree upon a one-state solution, Australia would recognize it.

“If they can come up with another solution that they were prepared to live with that ensured that the Israelis and the Palestinians could live side by side, live together behind internationally recognized boundaries then of course the world should support that,” Bishop told Sky News. “What we need is for the Palestinians to recognize that the state of Israel exists and will continue to exist.”

Bishop’s comments echo those made by US President Donald Trump who announced Wednesday that the United States would not insist on a two-state solution to the conflict, in a break from Washington’s decades-old policy and from the international consensus on the peace process.