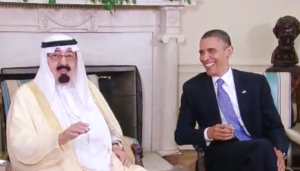 Bandar bin Sultan served for years as head of Saudi intelligence as well as the Saudi ambassador to the United States. In the interview, he recalled a last phone call between the late Saudi King Abdullah and Obama, during which the Saudi leader told the US president: “I did not expect that [after] this long life, I would see [the day] when an American president lies to me.”

Obama, bin Sultan said, “would promise something and do the opposite.” He said that the president took the Middle East back 20 years and also spoke critically of the Iran nuclear deal and how the former president spoke publicly about curbing Iran’s activities, but then went behind Saudi Arabia’s back and negotiated the nuclear deal.

These policies by Obama, he said, emboldened Russia and Iran and paved the way for them to enter Syria and interfere in the civil war that has raged there since 2011.

Prince Bandar bin Sultan is a member of the House of Saud and was Saudi Arabia’s ambassador to the United States from 1983 to 2005. From 2005 to 29 January 2015 he served as secretary general of the National Security Council, and was director general of the Saudi Intelligence Agency from 2012 to 2014. (Wikipedia) – Photo: Reuters.jpeg

Syrian President Bashar Assad, he said, was a “kid” and that while his late father Hafez was capable of making decisions, Bashar could not.

Regarding the Israeli-Palestinian conflict, bin Sultan said that the late Palestinian leader Yasser Arafat committed a “crime” against his people by rejecting the peace plan proposed by former president Bill Clinton.

The former ambassador said that he met with the feared leader of Iran’s al Quds Force, Gen. Qassem Soleimani, during a visit he made to Tehran.

“A coincidence led me to getting to (see) Soleimani face to face,” bin Sultan said. “Until then, we had [only] heard of him without seeing him.”