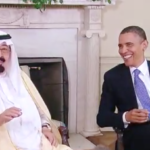 Bandar bin Sultan served for years as head of Saudi intelligence as well as the Saudi ambassador to the United States. Continue Reading »