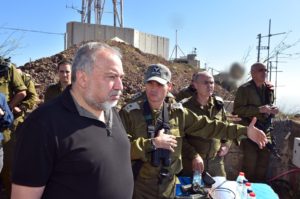 The ceasefire would be based on the understanding that was reached between Israel and Hamas after the 2014 Gaza War, Kahlil al-Hayya was quoted as saying, adding that Hamas is interested in signing an accord.

Al-Hayya was speaking from Cairo where he and other Hamas officials were discussing the terms of a ceasefire with Egypt and the UN mediating the talks.

The talks will now pause until the conclusion of the Muslim holiday Eid al-Adha later this month.

“Today we finished a round of consultations with the Palestinian factions regarding the calm and the reconciliation,” Hamas leader Izzar al-Rishq wrote on his Twitter, according to Channel 10. “God willing the efforts will renew after the holiday,” he added.

As the terms of the potential ceasefire undergo back-and-forth deliberation speculation has mounted over the details.

Hezbollah-affiliated media network Al Mayadeen published a report on Thursday claiming that Qatar will play a large role in the arrangement, funding Hamas officials’ salaries as well as fuel for the strip.

In addition,the establishment of a direct shipping route between Gaza and Cyprus was also referenced. Hadashot TV reported that Defense Minister Liberman conditioned the building of the seaport on the condition that the two Israeli citizens and the bodies of the two IDF soldiers held by Hamas were returned.

Meanwhile, an official from the Palestinian Authority (PA) spoke to Israel’s Kan news, saying all funds to Gaza would be seized if Israel and Hamas sign a ceasefire.

“The day after this agreement we will immediately cease transferring $96 million that we transfer to Gaza every month,” the official reportedly said.

Hadashot TV news reported on Thursday that the head of Israel’s Shin Bet security agency, Nadav Argaman, has warned cabinet members of excluding the PA in ceasefire negotiations with Hamas.

“Pushing aside (Abbas) from the process (of reaching an) agreement will strengthen Hamas in the West Bank and prove terror pays. Such a move would also weaken the moderates and prove to Palestinians that only the path of violence achieves results,” Argaman said.

Despite the reports of high level ceasefire negotiations between Israel and Hamas, which included a meeting between Prime Minister Benjamin Netanyahu and Egypt’s intelligence chief Abbas Kamel in Tel Aviv, two Palestinians were killed as thousands of protesters gathered at several locations along the Gaza-Israel border Friday.

Since late March thousands of Palestinians have demonstrated along the Gaza border fence, calling for the right to return to ancestral homelands in Israel.

The demonstrations have frequently turned violent, with participants throwing stones and explosive devices at Israeli troops, who have opened fire on the crowds.

This week Israels Defense Forces (IDF) estimated that “thousands” of protesters were taking part in demonstrations in five locations and several threw explosive devices and Molotov cocktails. Several broke through the fence into Israel but quickly retreated, the military said.