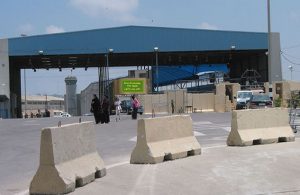 “The closure of the Beit Hanoun crossing [Erez] comes as a part of the steps being taken by the security apparatus following the crime of assassinating Mazen Fuqaha,” Hamas-controlled Interior Ministry Spokesman Iyad Bazm said in a statement published on the ministry’s website.

Nonetheless, Bazm clarified that “humanitarian cases” will be allowed to return to Gaza.

Before Hamas took control of Gaza, Palestinian workers in Israel wait at the Erez Crossing to return to the Gaza Strip, July 2005. – Wikimedia Commons

The Erez crossing is the only pedestrian crossing between Israel and the Gaza Strip.

Hundreds of Gazans including the ill, merchants, and others rely on Erez to enter and exit Israel daily.

Hamas-controlled security forces are also preventing Gazan fishermen from going out to sea, according to Wafa, the official PA news site.

There are approximately 4,000 fisherman in Gaza.

Fuqaha was killed in front of his home in Gaza City’s southern Tel al-Hawa neighborhood late on Friday night.

Hours after the assassination, the Hamas Interior Ministry said that the parties behind it are “unknown,” adding that the local security services opened an investigation.

“Hamas and its fighting brigades place the full responsibility for this reprehensible crime on the Israeli occupation and its collaborators,” the Islamist movement said in an official statement.

“The occupation knows that the blood of those struggling in the way of God will not be wasted,” the movement said. “Hamas knows how to deal with these crimes.”

The Kassam Brigades also said it would exact revenge for the killing.

“We will make the enemy regret the day that he thought he could begin [to carry out assassinations],” the brigades said in a statement.

“We swear to God, our Muslim nation and our people, that the enemy will pay a price for this crime that is equal in size to the assassination of our martyr leader. He who plays with fire will be burned by it.”

According to the Palestinian Authority Civil Affairs Ministry, Sunday’s closure of Erez is the first time ever Hamas has closed the crossing since taking over Gaza in 2007.

The PA Civil Affairs Ministry and the Coordinator of Government Affairs in the Territories spokespersons were not immediately available for comment.