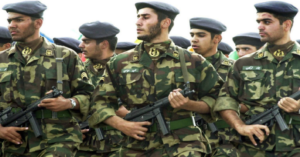 Syrian media reports contaminated water traced to areas south of the capital have mysteriously poisoned IRGC troops and Hezbollah militants, leaving many questions of foul play since Russia has been trying to counter any Iranian presence near Damascus.

According to the reports, the poisoning can be traced to water in one of Damascus’s southern suburbs, although it was unclear why it had been contaminated and whether this was intentional.

According to various reports in the foreign media, the Revolutionary Guards have recently been working on setting up a command center just south of the Syrian capital, to Russia’s chagrin.

One report claimed that Russia, which apparently views this as a blatant effort on the part of Iran to establish a high-profile and permanent presence in Syria, has tried to sabotage those plans.

It remains to be seen whether this latest incident was a result of foul play.