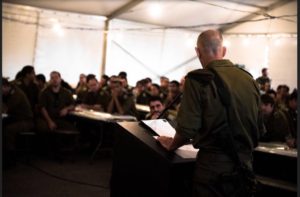 Israel has been monitoring Iranian attempts to create a land corridor from Tehran through Baghdad to Syria, according to the newspaper’s sources.

Some of the targets are Iraqi military sites that used to be controlled by the Iranian Revolutionary Guard but are now under US military authority.

In June, Israeli forces carried out a strike near the Iraqi border in Syria targeting Iranian weapon supply lines. Israel did not confirm or deny that it carried out the airstrike. A US official, however, denied responsibility and confirmed that Israel was behind the strike, according to the Wall Street Journal.

Iraqi Shiite militia were reportedly helping the Islamic Revolutionary Guard to transfer Iranian weapons to Syria through a town called al-Hari south of Abu-Kamal on the Iraq-Syria border prompting the Israeli strike, the official said.

Despite diplomatic pressure, Iran continues to transfer arms and attempts rebuild what Israel has targeted in order to maintain a military presence in Syria.

The withdrawal of Iranian forces has long been a demand of Israel, which is alarmed by the military presence of its chief nemesis so close to its northeastern border.

Israel has maintained a formal policy of non-intervention in the Syrian civil war but continuously asserts that it will not allow Iran to entrench itself in the country, where it has for years provided military backing to al-Assad alongside Russia.

If Israel carries out these strikes, it may represent an attempt on the part of the Jewish state to push back the area of confrontation with Iran as Assad’s forces expand their control of territory on Syria’s border with Israel.

The Syrian regime and its allies are currently looking to retake full control of Daraa on the border with Jordan and the Israeli-annexed Golan Heights after forcing rebel groups to sue for peace following a bloody offensive.

The alleged Israeli plans to target Iranian positions in Iraq come amidst reports of US withdrawal from a military base that straddles the borders of Iraq, Syria, and Jordan, playing an important role in maintaining US presence on the Iraqi-Syrian border.