Israel, Russia and Iran are violating an international embargo by supplying weapons to Azerbaijan and Armenia in the framework of their dispute over the Nagorno-Karabakh region, a number of media outlets reported Wednesday night.

An article published by the American Global Post news magazine quoted international observers as saying that the region’s strategic oil and gas pipelines and a tangled web of alliances and precious resources threaten to quickly escalate the border skirmishes and airspace violations to a wider regional conflict triggered by Armenia and Azerbaijan that could potentially pull in Israel, Russia and Iran.

In March, the American magazine reported, Azerbaijan signed a $1.6 billion arms deal with Israel, which consisted largely of advanced drones and an air defense system. Through this and other deals, Azerbaijan is currently amassing a squadron of over 100 drones from all three of Israel’s top defense manufacturers.

Armenia, the report said, employs only a small number of domestically produced models. 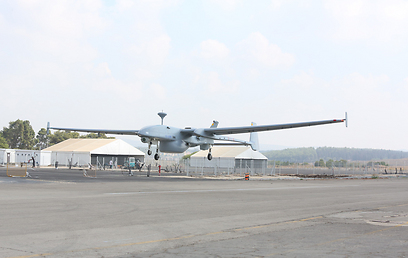 According to the report, the nations of the South Caucasus, where a fragile peace holds over three frozen conflicts, are buzzing with drones they use to probe one another’s defenses and spy on disputed territories.

The Global Post said that to some extent, Israel, Russia and Iran are already being pulled towards conflict. Last September, according to the report, Armenia shot down an Israeli-made Azerbaijani drone over Nagorno-Karabakh and the government claims that drones have been spotted ahead of recent incursions by Azerbaijani troops into Armenian-held territory.

Richard Giragosian, director of the Regional Studies Center in Yerevan, said in a briefing that attacks this summer showed that Azerbaijan is eager to “play with its new toys” and its forces displayed “impressive tactical and operational improvement.”

The International Crisis Group warned that as the tit-for-tat incidents become more deadly, “there is a growing risk that the increasing front-line tensions could lead to an accidental war.”

The UN and the Organization for Security and Co-operation in Europe (OSCE) have long imposed a non-binding arms embargo on Azerbaijan and Armenia, and both are under a de facto arms ban from the United States. But the Stockholm International Peace Research Institute (SIPRI) said this has not stopped Israel and Russia from selling to them.

The two former Soviet republics fought a bloody war over the disputed Nagorno-Karabakh territory between 1988 and 1994. The dispute has claimed the lives of some 30,000 people and left hundreds of thousands homeless. They have since been locked in a stalemate with an oft-violated ceasefire holding a tenuous peace between them. The drones are the latest addition to the battlefield.