The death toll from a devastating earthquake in Nepal has risen to 5,844, the government said Thursday.

Another 11,175 people have been injured in the 7.8-magnitude quake that hit on Saturday, the home ministry said in a series of tweets.

Climbing will resume on Mount Everest by next week after an earthquake-triggered avalanche that left 18 people dead on the world’s highest peak, a Nepalese government official said Thursday.

Saturday’s avalanche that ripped through base camp also destroyed ladders through the treacherous Khumbu icefall higher up the mountain, raising doubts about the future of this year’s climbing season. 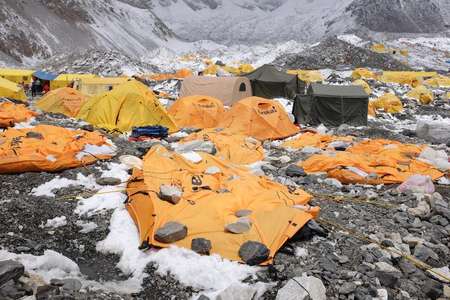 Rocks are kept over flattened tents on April 26, 2015 at Everest Base Camp to cover the bodies of some of the people who died a day earlier as an earthquake-triggered avalanche crashed through parts of the camp killing scores of people. – Photo: Roberto Schmidt /AFP/File

But tourism department chief Tulsi Gautam advised climbers against abandoning their expeditions, saying repairs were under way so that the spring season could continue for another few weeks.

“The ladders will be repaired in the next two to three days and climbing will continue, there is no reason for anyone to quit their expedition,” Gautam told AFP.

He also played down concerns of further quakes and aftershocks.

“There is no scientific reason to expect another quake… and we feel the ground is stable enough for climbing despite aftershocks,” he said.

Some 800 climbers were on the mountain when the avalanche roared through base camp, leaving 18 people dead and scores injured. It was triggered by a massive earthquake that has devastated Nepal.

The UN launched a $415 million appeal for survivors of Nepal’s massive earthquake as coordinators warned Thursday that it might take a five-day trek to deliver relief supplies to some of the worst-hit rural areas. 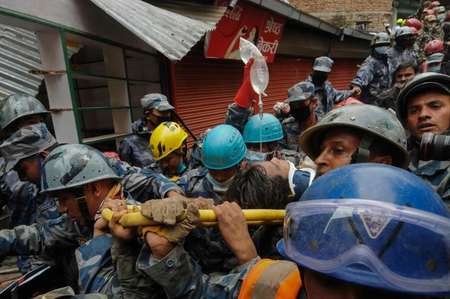 Nepalese rescuers carry Pemba Lama, 15, on a stretcher in Kathmandu on April 30, 2015 after he was pulled out of the rubble five days after he was buried by an earthquake. Photo: AFP

After desperate Nepalis clashed with riot police and seized supplies of bottled water in the capital Kathmandu, the government acknowledged that it had been overwhelmed by the scale of the crisis.

The exact extent of the damage in far-flung rural areas was yet to become clear with relief coordinators warning that the vast size and lack of roads in the Himalayan nation would complicate efforts to reach victims.

President Barack Obama promised the United States will do “all it can” to aid the relief effort as he offered his deepest condolences for the tragedy to Nepal’s Prime Minister Sushil Koirala, the White House said. 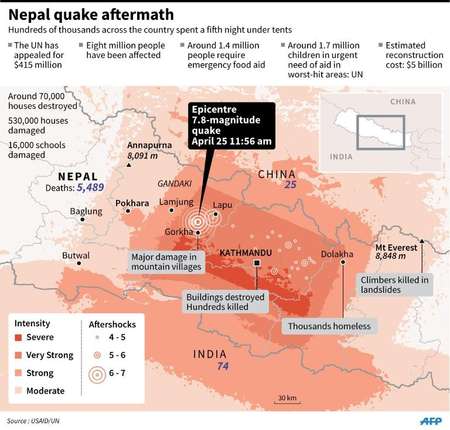 Launching its appeal for $415 million in aid, the United Nations said it would be take a marathon effort to help the people of what is one of Asia’s poorest countries.

“This will be a long drawn-out affair. It will be a three-month exercise to address the relief needs, then it will turn into a recovery process and a reconstruction process,” said UN resident coordinator for Nepal, Jamie McGoldrick.

The UN said there were “significant logistical challenges” in responding to such a large-scale crisis in hard-to-reach, mountainous areas.

Many of the communities worst affected by Saturday’s quake — the biggest to hit Nepal in over 80 years — are in remote areas of the Himalayas that rescuers have not been able to reach.

Only accessible by foot

In its latest situation report, the UN said that search and rescue (SAR) was still limited outside of the Kathmandu Valley. 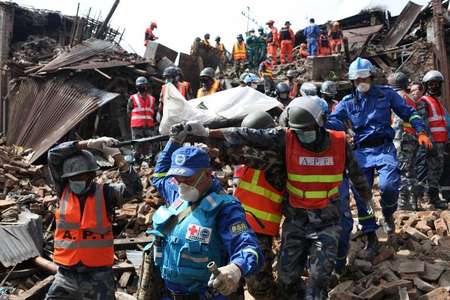 Picture taken on April 29, 2015 and released by the International Federation of Red Cross and Red Crescent Societies (IFRC) shows two bodies being excavated at Kolache-2, in Bhaktapur near Kathmandu. – Photo: Sailendra Kharel / IFRC/AFP

“Some villages can only be reached by foot with some areas taking up to four to five days to reach. Fuel to transport SAR teams is limited,” it said.

“There is a need to prioritize restoration of communications infrastructure, casualty management and basic relief in remote areas.”

The latest official toll from Nepal’s National Emergency Operation Center put the number of dead at 5,489 and more than 10,000 are known to have been injured.

The impact also caused death and destruction in neighboring countries such as India and China where more than 100 people were killed.

Although the number of aftershocks since Saturday’s quake has subsided, fresh tremors were felt in the capital Kathmandu overnight. 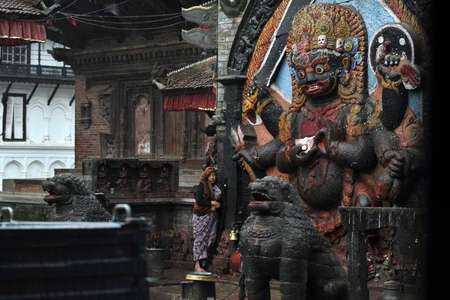 A Nepalese resident (C) perfoms a ‘puja’ morning prayer at a temple in the earthquake-damaged Durbar Square at dawn in Kathmandu on April 30, 2015 – Photo: Prakash Mathema/AFP

Some people who had spent the past four nights camped out in the open for fear of aftershocks spent their first night back home.

But a significant number are still living on the roadside or open ground, according to AFP correspondents in the ruined capital, which is normally home to some 2.5 million people, including many migrant workers.

“I don’t know how long we are going to do this. How long can we live on the street?” said Rajina Maharjan after another night camped out in a tent outside her house with her husband, in laws and a four-year-old son.

“We might return home in a few days, see how we can fix it and feel safe it in. It is raining on and off, we have old people and a child to take care of,” added Maharjan, a shopkeeper. 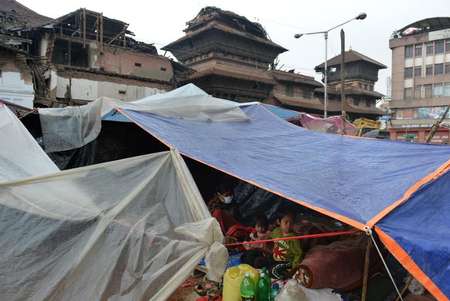 Nepalese residents sit in a makeshift shelter near buildings damaged in an earthquake at Durbar Square at dawn in Kathmandu on April 30, 2015 – Photo: Prakash Mathema/AFP

Hundreds of thousands of residents have however fled the city since Saturday, fearing aftershocks and wanting to inspect the damage back in their families’ villages.

Signs of normal life were returning Thursday to Kathmandu, with shopkeepers opening, some for their first time since the quake, and vegetable vendors laying out bags of produce before dawn at devastated Durbar square.

Riot police battled to contain the huge queues of people trying to get on long-haul buses on Wednesday that the government had promised to lay on.

Many complained that only a fraction of the buses actually arrived.

When the buses failed to materialize, anger began surging and scuffles broke out between the crowds and riot police close to parliament.

Some protesters forced a truck carrying drinking water off the road and climbed on top of it, throwing the bottles to the crowd.

The government acknowledged it had been overwhelmed by the devastation from the quake.

“There have been some weaknesses in managing the relief operation,” Communications Minister Minendra Rijal told Nepal’s Kantipur Television.

“The disaster has been so huge and unprecedented that we have not been in a position to meet the expectations of the needy people. But we are ready to accept our weakness, learn and move ahead in the best way possible.”