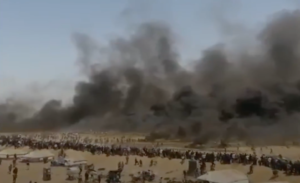 At funeral of Hamas operative/journalist Yasser Murtaja, who was shot by IDF while operating drone over border with Israel. – Screenshot: Reuters

“We are dealing with someone who was active in the security apparatus’s work on a daily basis and did much to help them,” the unnamed defense officials said.

The report noted that in 2015, Murtaja had attempted to bring a drone into Gaza to aid in Hamas’s intelligence gathering. The sources told Walla! that Murtaja was constantly in contact with senior officials in Hamas’s internal security mechanism and many of those officials attended his funeral.

Following his shooting, which was caught on camera and received widespread press coverage sparking condemnations from around the world, Israel’s National Journalists Association penned a letter to IDF Chief of Staff Gadi Eisenkot, requesting the IDF open an inquiry into the circumstances surrounding his death. Five other journalists were reportedly injured by live fire during the protests.

“We have seen dozens of cases where Hamas activists were disguised as medics and journalists. We also saw a journalist approach the border and operate a drone; we do not take chances in those cases. We issued warnings in English and Arabic to the protesters urging them not to endanger themselves. In the march of terror there were no innocent civilians, they were all Hamas members,” said Liberman.

The IDF announced on Friday that it was looking into the incident and stated flatly that the IDF “does not shoot journalists.”