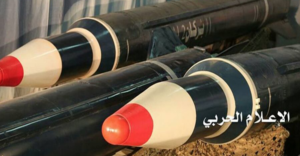 According to a report in the London-based Asharq Al-Awsat, the National Liberation Front, which is made up of 150 dissident officers, documented the presence of Iranian Fateh-110 and Zulfiqar short-range ballistic missiles and Russian-made Scud missiles.

The group also found that Toophan-1 anti-tank missiles are being stored in the strategic T-4 airport in Syria’s Homs province with other rocket caches in Jubb el-Jarah east of Homs, in Aleppo’s al-Safira, and south of Damascus.

In the early 1990s, Iran began developing the Fateh-110, a mobile short-range ballistic missile reportedly capable of carrying nuclear or biological warheads, and has since developed five variants with various ranges and payloads.

The Zulfiqar, a variant of the Fateh-110, has a reported range of 750 km. and possesses a cluster-munition warhead. According to Iranian media, the missile has an accuracy within 10 meters.

According to the report, Iran’s Revolutionary Guard Corps has also moved its leadership from Damascus to the mountains north of the capital because of repeated strikes by Israel.

Israel has warned repeatedly that it would not allow an Iranian presence in Syria, and has admitted to hundreds of air strikes to prevent the transfer of weapons – ranging from ammunition to surface-to-air missile kits – to Hezbollah in Lebanon and the entrenchment of its forces on the Golan.

Israel is concerned that Iran is not only trying to consolidate its grip in Syria, where it could establish a forward base to attack Israel, but that it is trying to build advanced weapons factories in Syria and Lebanon in order to manufacture GPS-guided missiles that could hit targets with greater accuracy.

Iran has been moving its assets from areas repeatedly struck by Israel to locations closer to the border with Iraq, specifically the T-4 air base strategically located between Homs and Palmyra.

The air base has been attacked repeatedly by alleged Israeli air strikes, most recently last week when an advanced weapons system was destroyed just days after two rockets were launched toward Israel’s Mount Hermon ski resort.