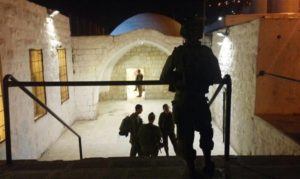 The forces responded by opening fire towards the vehicle. In addition, a military engineering vehicle hit the Arab vehicle, killing the two terrorists.

There were no injuries among the soldiers.

The incident came hours after the Israel Security Agency (Shin Bet), the Yaman and the IDF eliminated terrorist Omar Abu-Laila, who carried out the double stabbing and shooting attack at the Ariel junction and at the Giti Avisar junction earlier this week.

In the combined attack, IDF soldier Staff Sergeant Gal Keidan and Rabbi Ahiad Ettinger were murdered and another soldier was seriously injured.

The Shin Bet said that during the encirclement of the building in which Abu-Laila was hiding in the village of Abwein, near Ramallah, the terrorist opened fire at the Israeli forces and was killed during a gunfire exchange.