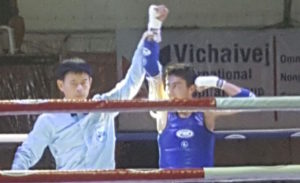 In a new video released by Palestinian Media Watch, Sultan admits that he was forced to pull out of the match by the Palestinian Olympic Committee.

“I didn’t make the decision,” Sultan told Palestine This Morning. “My trainers and the Olympic Committee made the decision, and as a competitor I cannot oppose them. The decision was reached that it is forbidden to compete with Israelis, because it is beneath our dignity to compete with them and recognize the State of Israel.”