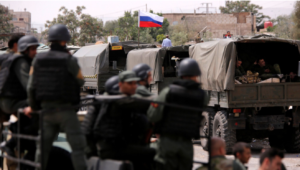 The report follows a Russian snub earlier this week to Israeli military officials, as Moscow appears reluctant to ease its anger over the loss of one of its planes during an IAF bombing raid in Syria in September. The plane was brought down by Syrian missiles targeting the Israelis, but Moscow insists that Jerusalem did not provide sufficient warning of its strike to allow its aircraft to reach safety.

Russian flags were recently seen near the military airport in the Syrian city of Hama, where Iranian installations were attacked by the IAF in the past. The flags were also flying in the cities of Homs and Idlib, as well as in the Syrian desert.

According to the report, Israel complained to Russia that its flags were spotted atop compounds and military convoys belonging to Iran and its allies in Syria. The complaint came ahead of a senior Israeli military delegation visit to Moscow on Tuesday.

According to Syrian opposition leader Colonel Petach Hasson, the Iranians promised to coordinate with the Russian military’s Syrian headquarters in Latakia in exchange for protection for the Shiite militias allied to Iran operating in the war-torn country.

The IDF Spokesperson’s Unit declined to comment on the Russian report.

Russian simulation showing the downing of one of its military planes over Syria, for which Moscow blames Israel. – Russian military

The IDF delegation’s visit to Moscow on Tuesday was the first time that military officials from the Israel and Russia met since Israel Air Force Commander Amikam Norkin visited Moscow in September. Norkin went to Moscow to present the findings of an Israeli inquiry into how Syrian anti-aircraft shot down a Russian plane during an IAF air strike.

The Russian Defense Ministry rejected the Israeli findings and insisted that Israel bears responsibility for the plane’s downing, and all attempts by Israel’s government to reconcile with the Russians were rebuffed.

Over the past two weeks, the Prime Minister’s Office in Jerusalem made frantic efforts to get their Russian counterparts to agree to host the Israeli delegation, led by the head of the IDF Operations Directorate, Major General Aharon Haliva. Following the meeting in Moscow, the Russians issued a brief statement emphasizing that nothing concrete had been agreed upon, except that the two sides would continue to hold discussions on security coordination in Syria.

Although Russian President Vladimir Putin yielded to Prime Minister Benjamin Netanyahu’s pressure to receive the Israeli delegation, the Russians did not intend to actually resolve the crisis over the plane, as evidenced by the fact that Haliva didn’t get to meet his Russian counterpart. Instead, Haliva was matched with his counterpart’s deputy, Major General Vasily Trushin, who is about to finish his term and is not actually involved in the Syrian crisis.

wow. Still angry at Israel? 3 months later?
Not enough time for the Russian generals to figure this out:

How long can a fighter jet hide
behind a propeller prop flying
in the opposite direction?

Then… We’ll get to the fact
that they were each flying
at different altitudes. 😎 pic.twitter.com/y4sRmBH95u

“Trushin is the only one in regular contact with Israel,” said a senior military Israeli official.

Furthermore, the Russians set the date for the meeting knowing full well that their chief of military operations, chief of staff, defense minister, and a large part of the Russian military brass would not even be in the country during Haliva’s visit.

“Our position remains unchanged. The chaotic damage done to Syrian infrastructure by the IAF, on the pretext of an Iranian threat, is unacceptable to us,” said a senior source in the Russian Defense Ministry ahead of Tuesday’s meeting.