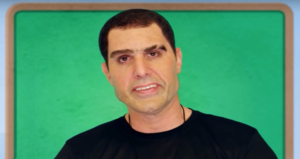 Having invented a character called Gio, which is as extreme as his other famous characters such as Borat and Bruno, Cohen pretended that, as Gio, he had relations with an eight year old boy and asked if the person with whom he is speaking with might be able to silence the boy. The conversation was done in Las Vegas and the person involved was working as a concierge.

The man declined to have the boy killed, saying “I’m really sorry, in this country, we can’t just drown the boy. This is America we don’t do that.” However he did offer to arrange a contact who’ll introduce Gio to more boys.

Cohen said that he and the filming crew handed over the materials shot to the FBI, which decided not to follow through with a full inquiry.

WATCH: Sacha Baron Cohen in SHOWTIME Series, Who Is America? (2018)