Pop superstar to have a serious sit-down with PM Netanyahu to discuss his comb-over before his upcoming meeting with Obama.

By PAY WITH CASH MAN

Following the drubbing in the media that she took earlier this month for her questionable attire at the inauguration of the 19th Knesset, Prime Minister Binyamin Netanyahu’s wife, Sara, is making sure no repeat faux pas will take place when US President Barack Obama visits Israel next month. 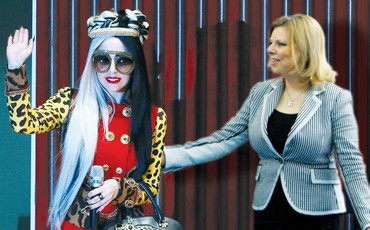 She’s turned to the queen of couture fashion – music superstar Lady Gaga – for a crash course in style and elegance ahead of the much-anticipated presidential visit.

“I know I can’t pull off wearing raw meat or a head cage, but I know I can do better than that black lace see-through outfit I wore at the Knesset,” Sara said at a briefing for fashion reporters at the Prime Minister’s Residence in Jerusalem. “So I had my husband summon Sheldon [Adelson, the PM’s special envoy, Las Vegas division] and tell him to contact Lady Gaga. The upshot is that we’re going to have a special consultation session next week.”

Contacted in Los Angeles, a spokesman for the outlandish singing star confirmed that Adelson had approached her.

“Ms. Gaga is very happy to help out Israel’s first family,” said Gaga’s assistant, Courtney Love, adding that Sara reminds the singer of her mother. “As a bonus, Ms. Gaga has also offered to sit with the prime minister to suggest an alternative to his current hair style.

“The comb over is so 1990s,” said Love. “We have ideas that will accentuate Mr. Netanyahu’s forehead, which when exposed, is actually very sexy.”

Gaga and her entourage will arrive in Israel on her private jet, and dine on Metudela ice cream with the Netanyahus at the Prime Minister’s Residence.

“It will be like a trial run for the Obama visit – we share that same regal quality,” said Gaga.

Sara agreed that the extra confidence Gaga will provide to her husband will make all the difference when he sits down with Obama for their fateful meetings in Jerusalem.

“It’s all about the image that you transmit,” she said. “Believe me, we’ll be so dazzling that Obama won’t even remember to mention renewing negotiations with the Palestinians.”

Gaga refused to comment on the speculation that she would accept a permanent cabinet post as style guru minister in the new government Netanyahu is forming. That post is currently being fiercely fought over between Yesh Atid stud Yair Lapid and Bayit Yehudi heartthrob Naftali Bennett.