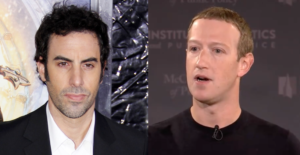 Calling the internet the “greatest propaganda machine in history,” he blamed social media for spreading hatred and lies into millions of homes and for re-igniting anti-semitism.

“It’s like we’re living in the Roman Empire, and Mark Zuckerberg is Caesar,” he said, not missing a chance to also crack a joke at his expense by adding, “At least that would explain his haircut.”

“It’s no surprise that the greatest propaganda machine in history has spread the oldest conspiracy theory in history—the lie that Jews are somehow dangerous,” he asserted.

During his speech, he lamented the fall of Democracy and rise in demagoguery, bigotry and hate crimes around the world.

He called on politicians to intervene in the reach of the “Silicon Six” (the heads of Facebook, Google, YouTube and Twitter) to intervene so these platforms can run their businesses in a more socially responsible way.

“It only seems fair to say to Facebook, YouTube and Twitter: your product is defective, you are obliged to fix it, no matter how much it costs and no matter how many moderators you need to employ,” he declared.

The self-aware Cohen also took a moment to point out that as a comedian, his presence at an ADL summit may seem odd.

“I realize that some of you may be thinking, what the hell is a comedian doing speaking at a conference like this! I certainly am,” he said. “I’ve spent most of the past two decades in character. In fact, this is the first time that I have ever stood up and given a speech as my least popular character, Sacha Baron Cohen. And I have to confess, it is terrifying.”

However, given that Cohen’s comedy is dedicated to pointing out the absurdity of hatred and prejudice, his presence is not entirely out of place, he explained.

“I’ve been passionate about challenging bigotry and intolerance throughout my life. As a teenager in the UK, I marched against the fascist National Front and to abolish Apartheid. As an undergraduate, I traveled around America and wrote my thesis about the civil rights movement, with the help of the archives of the ADL. And as a comedian, I’ve tried to use my characters to get people to let down their guard and reveal what they actually believe, including their own prejudice,” he revealed.

He pointed to a controversial scene in his hit film, Borat, where he played the title character who was a fish out of water journalist from Kazakhstan.

“When Borat was able to get an entire bar in Arizona to sing “Throw the Jew down the well,” it did reveal people’s indifference to anti-Semitism,” he said, citing other examples in his career where he exposed people latent prejudices.

“Google, Facebook and YouTube are used as a tremendous platform to convey Antusemitic messages and Holocaust denial. We must change the approach and prevent incitement. It is time for social networks to be held responsible! I once again call upon the great and leading social networks: it is time to stop training and start acting. I’m glad that public opinion leaders are starting to understand the problem and joining the call to eradicate Antisemitism on the Internet. ”