Palestinian Authority security forces arrested over the weekend scores of members of the radical group Hizb–ut-Tahrir (Party of Liberation) in the West Bank. 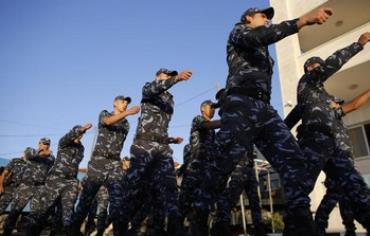 The crackdown came after the party distributed a leaflet strongly condemning PA President Mahmoud Abbas’s recent statements to The New York Times, where he said he would agree to the deployment of NATO troops in a future Palestinian state to prevent weapons smuggling and terrorism.

Founded in 1953, Hizb-ut-Tahrir is an international pan-Islamic political group whose goal is to unify all Muslim countries under an Islamic state or Caliphate. The group has several thousand supporters in the West Bank and Gaza Strip.

The leaflet, which was handed out to worshipers following Friday prayers in several West Bank mosques, said that Abbas’s readiness to allow NATO troops to be present in a Palestinian state was a “big and unprecedented crime.”

The leaflet said that Britain tried in the past to “dispatch international forces to Palestine, specifically to Jerusalem, to achieve its Crusader ambitions, but failed.”

The leaflet claimed that the US also sought to send foreign troops to the West Bank after the Six Day War, but also failed.

“Everyone knows that Mahmoud Abbas is not authorized to make such a proposal to the Americans,” the leaflet said. “This is an American scheme and Abbas and his authority are nothing but tools intended to implement it.”

Following the arrests, the party issued another leaflet strongly condemning the targeting of its supporters in the West Bank.

“The main reason for these arrests is the role of the Hizb–ut –Tahrir youths in distributing the leaflet and because they don’t recognize the legitimacy of Jewish occupation,” the party charged. It said that those arrested “do not want an international occupation where Palestinians would be held in secret American prisons. They are calling on Muslims to liberate Palestine and establish an Islamic Caliphate.