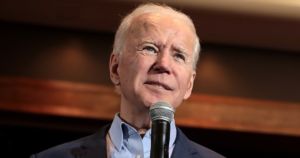 The Coalition for Jewish Values (CJV), representing over 1500 traditional rabbis in matters of public policy, today called upon Joe Biden, the presumptive Democratic nominee in the 2020 Presidential race, to withdraw his statement that he would resume funding to the Palestinian Authority despite its ongoing provision of financial rewards to the families of terrorists, and his claim that Israel would ‘jeopardize a two-state solution’ were it to extend sovereignty over Jewish communities in Judea and Samaria.

“Every American should be outraged,” said Rabbi Dov Fischer, Western Regional Vice President of the CJV. “Joe Biden has just said he would break US law to do something which is also, of course, morally repugnant — to reinvolve the American taxpayer in incentivizing terrorism against innocent Americans like Taylor Force and others.”

The Taylor Force Act, passed with bipartisan support in 2018, requires termination of the Palestinian Authority’s “pay to slay” program in order for the PA to continue receiving most forms of financial aid from the United States. Specifically, the PA must “have terminated payments for acts of terrorism against Israeli citizens and United States citizens” and “have revoked any law, decree, regulation, or document authorizing or implementing a system of compensation for… an individual imprisoned for an act of terrorism.” PA chairman Mahmoud Abbas has refused to do so, saying that killed and imprisoned murderers are “the most sanctified” and that “If we are left with one penny, we will spend it on the families of the prisoners and martyrs.”

“Regarding Jewish towns in Judea and Samaria, places from which Jews were ethnically cleansed by the Jordanian Army in 1948, and permitted to return only after Israel acquired that land defending itself once again in 1967, successive Administrations have acknowledged that those communities will remain permanently part of Israel, as UN Resolution 242 authorized in 1967, in any negotiated peace agreement. As President, Barack Obama drew an angry response for claiming Israel should compensate the Palestinian Authority with “land swaps” as “compensation” for permitting Jews to live in Judea,” the CVJ stated,

“As a Senator, Joe Biden both declared and demonstrated his strong support for Israel,” added Rabbi Yoel Schonfeld, Vice President of the CJV, “yet in recent years he has been pulled away by radical Anti-Israel leftists. Now he blames the Trump Administration for following US law, while also saying that it would somehow ‘jeopardize a two-state solution’ for Israel to extend its sovereignty over Jewish communities that would remain part of Israel after any conceivable peace deal. He must realize that fairness and civil rights demand a balanced approach, without double standards that blame Israel for desiring to live in peace.”