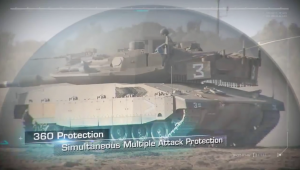 The Trophy active missile defense system, developed by Rafael, is designed to protect tanks and other armored vehicles from missiles, rockets, and other projectiles. The system consists of a radar detection system that identifies the launch of hostile projectiles their trajectories, and launchers that fire metal pellets which are similar to shotgun rounds. The pellets explode the projectile before it reaches the armored vehicle.

“Under the terms of the contract, Leonardo DRS will provide the [US] Army with TROPHY systems, countermeasures, and maintenance kits,” Rafael announced.

The active missile defense system will be installed on the US army’s Abrams tanks to support immediate operational requirements.

Aaron Hankins of Leonardo DRS stated: “Leonardo DRS is proud to be a part of this important effort to bring life-saving technology to our warfighters, and we are actively investing to ensure TROPHY provides a solid, American-made foundation for the Army’s coming Vehicle Protection Suite program.”

The system is installed on hundreds of ground combat platforms in the IDF, including the Merkava Marks 3 and 4, as well as the NAMAR armored personnel carriers.

TROPHY has proven itself numerous times on the battlefield since it was first installed on Israeli vehicles in 2011, including during 2014’s Operation Protective Edge in the Gaza Strip.