Spielberg addresses UN: We must act on what was learned from the Holocaust

Israeli envoy Ron Prosor tells the UN, “State of Israel is the only guarantee to ensure the future of the Jewish people.”

Oscar-winning film director, writer and producer Steven Spielberg stressed on Monday the importance of gathering testimony to horrors such as the Holocaust in order to create awareness and preventative measures for the future.

“Mass graves don’t have to open up before we act,” Spielberg said in the keynotes address of a special UN General Assembly session marking the International Holocaust Remembrance Day. “It is a great accomplishment of our species that the testimonies [of survivors] can be heard in the high chambers of society.”

The director of the epic Holocaust-era film Schindler’s List said the memory of the Holocaust remained with us today and the victims of past genocide had now become “teachers to victims of recent genocide.”

“Genocide is an evil. But, the greatest evil is when people who have been spared the horrors commit themselves to despair,” Spielberg said.  “We know despair and remembering are a choice. But we need to confront and act on what we learned,” he added.

Touching on his preparations for Schindler’s List, Spielberg said directing the film and interviewing survivors were part of his approach to offering a platform for what he said was an often-encountered hope of survivors to be “heard, believed and understood”.

“It took me years of directing sharks, aliens, and dinosaurs before I felt ready to tackle the Holocaust,” he admitted.

Spielberg said although he had no personal journey through the Holocaust, his “Holocaust journey is a journey toward understanding.” 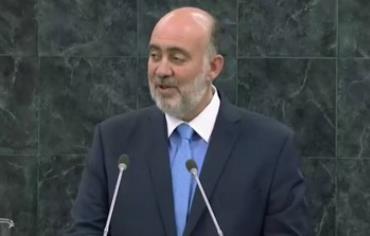 Spielberg said history and the memory of the Holocaust must be engaged with fully to progress justice.

Meanwhile, Israel’s Ambassador to the UN Ron Prosor stressed that remembering the Holocaust was not enough to guarantee the future for the Jewish people.

“The State of Israel is the only guarantee that the future and fate of the Jewish people will be held in our own hand,” Prosor said Monday at the UN memorial.

“The Holocaust has taught us that remembrance without resolve is meaningless,” Prosor said. “Awareness must be matched with action.”

“Almost 70 years after the Holocaust, the world is still plagued with anti-Semitism,” Prosor noted. “Men and women are still persecuted for what they look like, how they worship, and who they love.”

The UN, that was born from the bloodshed and brutality of World War II, has a responsibility to educate the future generation to acceptance, compassion and tolerance, Prosor said.

Quoting Holocaust survivor Elie Wiesel who said “To remain silent and indifferent is the greatest sin of all,” Prosor said it is our responsibility to never again allow silence to prevail and indifference to reign.

The special UN ceremony was held at the UN headquarters in New York, centered around the theme “Journeys through the Holocaust.”

Ban recently released the video, reflecting on his visit to the Auschwitz concentration camp in Poland late last year.

“I will never forget my visit. I saw the horrific remnants of the machinery of genocide… The United Nations was founded to prevent any such horrors from happening ever again,” Ban Ki-Moon stated.

“We will continue to shine a light on these unspeakable crimes so that they may never be repeated,” he added.

Emphasizing the importance of formal instruction on this subject, the secretary-general has also said that education and public awareness are the first defense against prejudice, ethnic hatred and intolerance.

“On Holocaust Remembrance Day, we must keep alive the memory of this tragedy. It is an occasion to remind us all of the need to continue fighting prejudice and racism in our own time. We must remain vigilant against the dangers of hate speech and redouble our commitment to prevent any form of intolerance. The respect of human rights and diversity lies at the heart of what the European Union stands for,” Ashton stated.

The International Holocaust Remembrance Day is marked every year on January 27.

It was designated by UN General Assembly resolution 60/7 on November 1, 2005, after a special session held on January 25 that year that marked the 60th anniversary of the liberation of the Nazi concentration camps.

The largest Nazi death camp, Auschwitz-Birkenau, was liberated by Soviet troops on January 27, 1945.

Maya Shwayder contributed to this report.