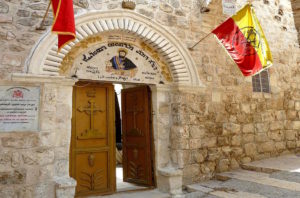 Ever since Bishop Murad Severius sued the Palestinian Authority for fraud when they used forged papers in a land transaction where the properties did not actually exist, the Palestinians have accused him of selling land to Jews, arrested him, and now, trying to ruin his reputation with sexual allegations made by a woman who happens to be the wife of a Palestinian allegedly persecuting him.

A Syriac Orthodox bishop based in Jerusalem has claimed the Palestinian Authority had sent a call girl to him in an attempt to entrap him.

Murad Severius, 51, was investigated by police after having been accused of committing sex crimes, but the case was closed two weeks ago due to the lack of evidence.

His feud with the Palestinian Authority began when Severius purchased several properties worth $1.5 million dollars from the PA in 2010. He later learned that forged papers were used in the transaction and the properties did not in fact exist. He sued for fraud, with the case still ongoing at a Bethlehem court.

In May of 2014, a young Palestinian woman filed a complaint against him for sexual assault. She claimed he abused her sexually at his private residence above the church in Jerusalem’s Old City. The investigation against him was closed two weeks later.

When the girl appealed the decision, the case was reopened and Severius was summoned for a hearing ahead of an indictment.

During the hearing, Severius’s defense team presented evidence alleging the girl had been sent by PA officials who allegedly wanted the bishop to lose his position due to his ties with Israeli authorities and the fact he sells property to Jews.The woman, Severius argued, decided to complain against him after a fortune teller in Bethlehem convinced her to do so.

Furthermore, the bishop claimed the woman was the wife of a Palestinian who was involved in persecuting him for his ties to Jews.

Severius also claimed that during a festive ceremony in Bethlehem in 2016, attended by thousands of members of the Syriac Orthodox denomination, the PA had decided to arrest and humiliate him. They interrogated him, both, regarding the alleged sex crimes and also regarding the claims he sold properties to Jews.

Severius said a week later he was called in again by the PA and was offered a deal, whereby he would drop his lawsuit, and in return they would ensure the girl dropped the charges against him.

After his hearing, the District Attorney’s Office decided to close the case for lack of evidence. “I am glad that the case was closed, and it is now behind me. I have been through a difficult three years,” said Severius.

The bishop’s attorney said that if he had gone to trial for the alleged sex crimes, his standing among world Christians would be severely harmed.

“Interested parties from the PA who sought to get rid of the bishop cunningly and blatantly forged documents and managed to get him fired by his superiors. They also sent a young woman to claim that he sexually abused her. They knew that the damage caused to him would be irreparable, and they nevertheless spared no effort to harm him,” said his attorney Ariel Atari.