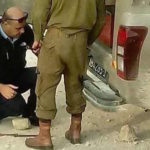 After photos of Hebron police chief Col. Ahmad Abu al-Rub, angered Palestinians on social media, he was suspended and referred to “investigative committee” for “collaboration with Israel,” when he helped Israeli soldiers change a flat tire.

A local Palestinian police chief has been suspended for helping Israeli soldiers fix a flat tire in the West Bank.

Police spokesman Loae Izrekat said on Thursday that Col. Ahmad Abu al-Rub was suspended and referred to an “investigative committee.”

Ever since Bishop Murad Severius sued the Palestinian Authority for fraud when they used forged papers in a land transaction where the properties did not actually exist, the Palestinians have accused him of selling land to Jews, arrested him, and now, trying to ruin his reputation with sexual allegations made by a woman who happens to be the wife of a Palestinian allegedly persecuting him.

A Syriac Orthodox bishop based in Jerusalem has claimed the Palestinian Authority had sent a call girl to him in an attempt to entrap him.

Murad Severius, 51, was investigated by police after having been accused of committing sex crimes, but the case was closed two weeks ago due to the lack of evidence. Continue Reading »