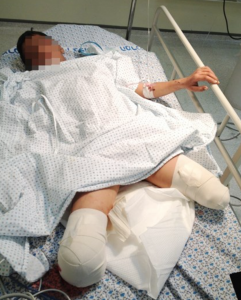 Seven wounded Syrians—two children, four women and a man—waited in pain for darkness to fall to cross into enemy territory. Under the faint moonlight, Israeli military medical corps quickly whisked the patients across the hostile frontier into armored ambulances headed to hospitals for intensive care.

It was a scene that has recurred since 2013, when the Israeli military began treating Syrian civilians wounded in fighting just a few kilometers (miles) away. Israel says it has quietly treated 3,000 patients—a number that it expects to quickly grow as fighting heats up in neighboring Syria in the wake of a chemical attack and, in response, an unprecedented US missile strike.While the numbers are a tiny fraction of the hundreds of thousands of dead and wounded in the six-year Syrian war, both doctors and patients say the program has changed perceptions and helped ease tensions across the hostile border.

During Thursday night’s rescue, medical officers decided that two of the seven patients had wounds that were too urgent to wait and so radioed in a helicopter. Soldiers carried the two on stretchers beneath the whirring blades as the helicopter lifted off into the inky night sky.

“We check their breathing, their pulse, their blood pressure—all their vital signs,” said Lt. Omri Caspi, a medical officer. “We take a look at their injuries, we see the cuts, we check the chest, the heads, everything, and then we decide which treatment they need.”Just a few years ago, such scenes would have been unthinkable. Israel and the government of Syrian President Bashar al-Assad were bitter enemies, and contact across the hostile lines of the divided Golan Heights was virtually nonexistent.

The outbreak of Syria’s civil war in 2011 has radically altered the area, though. The Syrian side of the Golan is now divided between government troops and a host of rebel groups. Russian, Iranian and Lebanese Hezbollah forces have all entered the fighting to offer support to Assad’s beleaguered forces.Israel has largely stayed out of the fighting in Syria, which has claimed over 400,000 lives. But it has carried out a number of airstrikes on suspected weapons shipments to Hezbollah, a bitter enemy that is fighting alongside Syrian government forces.

Tensions skyrocketed this week after an alleged chemical weapons attack by the Syrian government killed dozens of people. The US responded early Friday by launching 59 Tomahawk missiles at a Syrian air base—a dramatic escalation lauded by Sunni states, rebels and Israel but condemned by Assad, Russia and China.

Israel’s newest patients started their treatment just as the American missiles struck, a little before dawn, less than 200 kilometers (120 miles) away inside Syria.Two Syrian patients shared their experiences in Syria and Israel, as soldiers from the IDF supervised. The two spoke on condition of anonymity out of fear they or their families would be targeted in Syria if their stay in Israel is made public.

Both young men praised the Israeli people and government while lambasting Assad and his supporters. They said that as patients have returned to Syria from Israel, word has slowly spread that Israel can help those desperately wounded. The medical care is free of charge. The hospital said it doesn’t discriminate when it comes to admittance, and insists it doesn’t collect personal patient information.One patient, a 26-year old from Deraa, the city in Syria’s south where the revolution broke out in 2011, flashed a toothy smile while sitting in a wheelchair; one leg a bandaged stump, the other gripped in a metal cast. He said he was on the street when a bomb blast mangled his legs. He couldn’t find treatment in Syria’s devastated medical sector, so he made his way to Israel, a nation he was raised to hate.

“Back when there were no incidents in Syria, no revolution, no nothing—the greatest enemy in the world was Israel. It was the first enemy,” he said.

His fellow patient used the pseudonym “Baibars,” the name of a 12th-century Muslim warrior who defeated the Crusaders and Mongols. A bomb crushed bones in his face, an injury that without medical help festered until he struggled to open his mouth.

After 40 days in the Ziv hospital and many surgeries later, the 25-year old revolutionary now talks incessantly and even sings about lost love—in addition to praising for Israeli pastries.

“We reached countries that my grandparents did not reach and met good people,” he crooned through a jaw yet to have fully healed.

From his Israeli hospital room Baibars said he could see into Syria. In his long list of enemies of the Syrian people—Assad, Russia, Iran, Houthis, Hezbollah, Afghanistan—he no longer includes Israel.

“The regime has used chemical weapons since the beginning of the war,” Baibars says, referring to alleged attacks in East Ghouta and Dharaya. “We were just trying to defend ourselves.”

“The future of Syria has no Bashar Assad,” Baibars says. “Israel is not the enemy. Bashar is the enemy.”