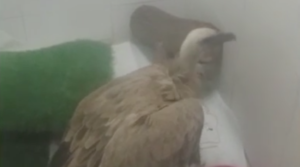 The Gamla vultures—as evidenced by the tracking devices affixed to some of them to trace their movements—occasionally fly over the border. When they do, they are sometimes caught and the electronics attached to their leg are often suspected of being espionage devices.

It appears this vulture was also suspected of being an Israeli spy, and was captured by rebel forces when it crossed the border. News of its capture reached animal activists, who went into action and mediated between the IDF and the rebel organization on the bird’s behalf. Thanks to their involvement, the vulture was returned home Tuesday by a third party.

The vulture was transferred to the Ramat Gan Safari’s wildlife hospital the same evening having sustained a leg injury. After receiving medical attention, the bird was said to be doing well and after recuperating, it is on course to spread its wings once again and be released back into the wild.

Rebels agreed to release the vulture as an expression of gratitude for the medical attention Israel provides their injured brethren, some of whom have been or still are hospitalized in Israel’s northern region

The vulture’s return is not taken for granted by wildlife authorities aware of their dwindling numbers in Israel which threatens to send them into extinction.

In southern Israel they maintain relatively stable numbers, albeit much smaller compared to the past. In the north, however, their population is steadily declining. The Golan Heights, formerly considered the natural habitat of vultures, has seen almost no new nestings in the past few years.