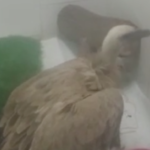 The Gamla vultures—as evidenced by the tracking devices affixed to some of them to trace their movements—occasionally fly over the border. Continue Reading »