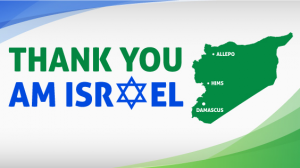 “Thank You Am Israel” is the name of a new website dedicated to “acknowledging the numerous Jewish and Israeli individuals and organizations who have gone out of their way to provide aid, assistance and medical care to Syrian refugees since 2011.”

The site was created by Aboud Dandachi, a Syrian refugee currently living in Istanbul, who had this to say about the true nature of Israel:

“At a time when numerous countries in the Arab world and Europe have turned away those fleeing the conflict in Syria, Israeli and Jewish organizations and NGOs have, often at great risk to themselves, been at the forefront of efforts to provide assistance to Syrians. In a world where the refugee issue has been exploited by opportunistic political parties in Europe and the United States, Jewish groups have offered assistance to Syrians in need unreservedly and with no expectations of any manner of reciprocation.”

Dandachi goes on to note that “one of the truest moral tests of a society is in how it treats those in need, and who have nothing to offer in return save for gratitude.”

The current generation of Israelis and Jews worldwide have met this standard with flying colors, according to Dandachi, who concluded by thanking Israel and the Jewish people “for showing kindness and charity to Syrians… God bless you and protect you.”

Visit: www.thankyouamisrael.com
Or on Facebook at: Thank You Am Israel