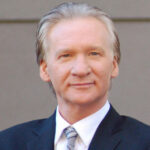 The American late night comedy landscape hasn’t been kind to Benjamin Netanyahu this election season. But on Friday, Bill Maher – always one in favor of shaking things up – came to the Prime Minister’s defense on his HBO show Real Time with Bill Maher.

Maher dismissed hypothetical comparisons by critics who compared Netanyahu’s controversial statement where he warned his Right-wing base of a strong Arab voter turnout to Romney making similar statements against African Americans in 2012. Continue Reading »