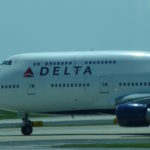 A former Delta flight attendant claims Delta, without offering a proper explanation, forced religious Jewish customers to stow their religious items in checked-in luggage, refusing to allow them to be taken on board for prayer.

Delta Airlines, the world’s second largest carrier, is facing a discrimination suit by four of its flight attendants who accuse the company of discriminatory policies towards Jews.

According to plaintiff Cynthia Fukelman who was fired after a decade of service, “Delta Airlines forced religious passengers to check their hats, Teffilin, Talit and other religious garment in the plane’s undercarriage, and did not allow them to carry them aboard the plane so that they could pray. Continue Reading »

Unlike El Al, Hareidi Men Disembarked Delta Flight After Refusing to Sit Next to Women

Earlier this week, a group of Jewish Ultra-Orthodox men who refused to sit next to women opted to disembarked from a Delta flight, when the surrounding passengers refused to acquiesce and change seats.

A group of hareidi men who were supposed to fly to Israel from the United States on Delta Airlines flight Tuesday night refused to sit next to women, who in turn refused to switch seats, causing them to disembark from the plane.

Flight 468 was set to depart from Kennedy Airport in New York. Continue Reading »