In formal letter of protest to the UN Secretary General, EU foreign policy chief, Cyprus, Italy and Greece, Lebanon’s foreign minister, Gebran Bassil asks for them to honor Lebanon’s exclusive economic zone (EEZ), emphasizing to the Greek FM that Beirut will not permit its sovereignty to be violated.

Lebanon on Thursday warned its Mediterranean neighbours that a planned EastMed gas pipeline from Israel to the European Union must not be allowed to violate its maritime borders.

Beirut has an unresolved maritime border dispute with Israel – which it regards as an enemy country – over a sea area of about 860 sq km (330 square miles) extending along the edge of three of Lebanon’s southern energy blocks. Continue Reading » 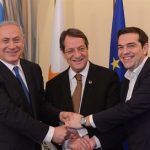 Feasibility studies had been completed but work on developing it would not begin for several years, so the 4 ministers agreed to meet every half-year to advance the new gas pipeline that will boost cooperation & boost supply.

Italy, Israel, Greece and Cyprus pledged Monday to move ahead with the world’s longest undersea gas pipeline from the eastern Mediterranean to southern Europe, with support from the European Union.

If carried out as planned, the long-discussed $6.2 billion pipeline would take gas from Israel and Cyprus’s recently discovered offshore gas reserves to Europe and could help reduce the continent’s dependence on Russian energy at a time of ongoing tensions. Continue Reading »