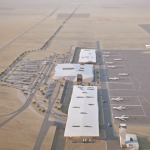 Due to open next April, Ilan and Assaf Ramon Airport at Timna will be 10 kilometers (6 miles) from Jordan’s King Hussein International Airport. They will serve Eilat and Aqaba, the adjacent Israeli and Jordanian resort cities on the Red Sea. Continue Reading »