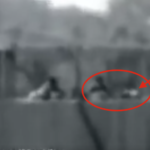 WATCH: Two terrorists firing shots at IDF soldiers near the northern Gaza Strip from a Hamas post.  Then in response, an IDF tank targeted & hits the post from where the shots emanated from.
– No injuries to IDF troops were reported.

Two Hamas militants were killed Tuesday after the IDF shelled a Hamas position near Beit Lahiya in the northern Gaza Strip after troops came under fire while on patrol.

The two men were identified by the Palestinian Ministry of Health as Ahmad Morjan and Abed el-Hafeth el-Sillawi, both 23 year-old and members of the terror group’s military wing the Izz ad-Din al-Qassam Brigades. Continue Reading »