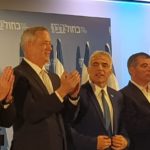 In a breathtaking display of immoral cynicism, Blue & White’s leadership, which of the four, three are former IDF Chiefs of Staff who appear prepared to welsh on their most explicit campaign pledge. – But most unbelievable: the harm to Israel is far worse than their deceitfulness to their supporters.

This week, Israeli politics plumbed appalling new lows with reports that, Blue & White, which, as the major rival to PM Benjamin Netanyahu’s Likud, emerged as the second largest party in last week’s Knesset elections  was actively planning to violate its solemn pledges to the voters, made only days previously. Continue Reading »

According to the report, a number of MKs from the Joint List met with UN officials alongside Palestinian Authority representative Riyad Mansour and other senior PA officials in order to arrange the passing of the anti-Israel resolution. Continue Reading »