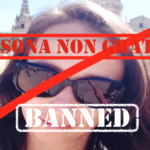 Lydia de Leeuw had persistently taken part in activities against the State of Israel and demonstrations, and promoted the de-legitimization of and boycott against Israel in the Netherlands. Continue Reading »