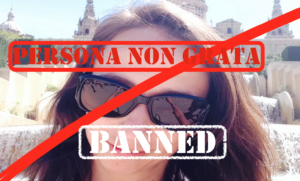 Lydia de Leeuw had persistently taken part in activities against the State of Israel and demonstrations, and promoted the de-legitimization of and boycott against Israel in the Netherlands.

The Population and Immigration Authority at Ben-Gurion Airport was acting under the instruction of Strategic Affairs and Information Minister Gilad Erdan.

“The policy I have set is clear: anyone who acts consistently to boycott us will not enter the country.

The rules have changed and the State of Israel will not hold back anymore against those who try to harm us,” the minister said.

Interior Minister Aryeh Deri commented, saying that he was using his authority to prevent the entry of any person who tried to harm the State of Israel.

“The same will be true for any boycott activists in the future who want to enter Israel,” he specified in an attempt to prevent further incidents of this kind.

A little over two weeks ago, in a similar case, Jewish female BDS activist Ariel Elyse Gold was refused entry into Israel and send back home.

Gold also was a known member of the boycott, divestment and sanctions movement and specifically active in the Code Pink group, a far-Left peace and social justice NGO.

She later revealed in an interview with i24 News that she might be planning to make Aliyah to bypass the travel ban “That might be my next step. It’s a possibility,” she told the station.

If Gold immigrates to Israel it is possible that the ban on BDS activists would no longer apply to her since she would become an Israeli citizen. She would have to first apply for citizenship and her application would be evaluated by the Jewish Agency and the Immigration and Absorption Ministry.