“The IDF has began attacking terrorist targets belonging to the Hamas terror organization across the Gaza Strip. Continue Reading » 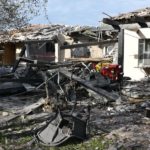 Hamas officials have said that the rocket which struck a home in central Israel injuring seven civilians was fired from the Gaza Strip by mistake, Israeli media reported Monday morning.

According to the reports after the long-range J-80 rocket was fired by Hamas operatives by mistake, the group evacuated positions across the coastal enclave in anticipation for an Israeli retaliation. Continue Reading »