Killed Terrorist Died for the Virgins, Not the ‘Struggle’ 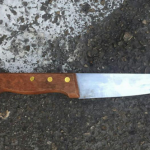 The butcher’s knife yielding 54 yr-old Palestinian terrorist was a bachelor that never married because he was waiting for his ’72 virgins in Paradise.‘

Ibrahim Barda’aya, a 54-year-old single resident of al-Aroub to the north of Hevron in Judea, was recently shot dead by security forces as he attempted to conduct a stabbing attack armed with a butcher’s knife.

The imam of Barda’aya’s mosque Abdullah Azam told the Hamas paper Palestine that the terrorist merited to be a “martyr” and to “marry virgins in Paradise,” reciting the classic Muslim trope used in inciting terror attacks. Continue Reading »