Six civilians injured in Petah Tikva market after shooting spree by Palestinian terrorist, who was subdued by shopkeepers and bystanders then turned over to Border Police.

Six people were lightly wounded after a shooting and stabbing attack at an open market in the central Israeli town of Petah Tikva on Thursday afternoon.

Police said an 18-year-old from Nablus open fired on a bus at the entrance to the market on Hirsch street at around 4:45 p.m. and then ran to a sewing shop and stabbed someone before he was stopped by civilians and later arrested by police. Continue Reading » 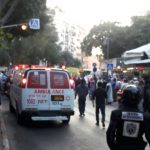 The five injured were taken to Petah Tikva’s Beilinson hospital.
One Arab suspect has been arrested.
This is a developing story.

At least five people were wounded in what police were treating as a terrorist attack at a market in the central Israeli town of Petah Tikva on Thursday afternoon.

Magen David Adom said its emergency responders have evacuated four adults with gunshot wounds and one adult male with stab wounds to a nearby hospital.

Police said that the suspect, who was arrested at the scene, is likely from the West Bank.

Authorities were investigating the motives surrounding the incident. Continue Reading »