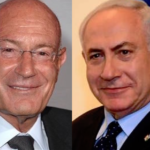 Police tell billionaire Arnon Milchan: ‘You bribed Netanyahu in exchange for the assistance he gave you on Channel 10 interests.’

– During a 3-hr interrogation of the Israeli-born tycoon in London, Israel National Police investigators detailed their theory to Milchan, whom the police suspect a quid pro quo deal took place with Netanyahu, which they want to believe resulted in the PM protecting his business interest.

Investigators who grilled the Israeli-born tycoon Arnon Milchan in London last week on suspicion he bribed Prime Minister Benjamin Netanyahu, apparently told him “you bribed Netanyahu in exchange for the assistance he gave you on Channel 10 interests,” according to police officials’. Continue Reading »

With the latest fatality, a 60 yr-old female motorist who died from hitting camels left wandering along the highway last night, southern residents are baffled why there’s been only 1 prosecution after 7,151 complaints of unattended camels roaming Israel’s Negev roads.

Camels wandering the roads in the Negev are costing lives. A woman was killed in a fatal road accident near Beersheva yesterday (Sunday), after crashing into a caravan of camels which were roaming the roads unattended.

Amichai Yogev, southern district director of the Regavim organization, provided legal representation for the family of David Cohen, who died a year and a half ago after colliding with a camel. Continue Reading »